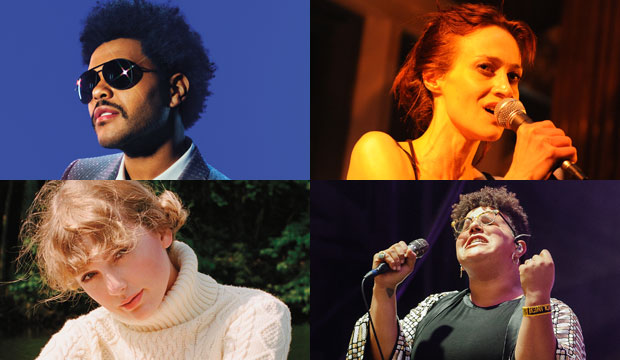 The general field at this year’s Grammys will be interesting to watch. Given the current political climate in the US, the recording academy has made efforts to diversify itself, and this may be reflected in the nominations too. Let’s consider which artists are primed for Album of the Year glory.

All eyes seem to be on The Weeknd’s critically-acclaimed blockbuster “After Hours” to compete for the top honor. “After Hours” would definitely be an odd man out in the history of winners; it’s noticeably darker and more explicit than past champs. However, it may be the perfect time to honor a Black artist after complaints that the Grammys usually pick white winners (the last Black artist to win this award was Herbie Hancock in 2008 for his collection of Joni Mitchell covers).

In recent years acclaimed albums like Beyonce’s self-titled collection and “Lemonade” and Kendrick Lamar’s “To Pimp A Butterfly” and “DAMN” have lost the top honor to albums considered safer and more adult-contemporary. Will The Weeknd break that trend and score his first Album of the Year win?

Another big front-runner is Taylor Swift with her eighth studio album, “Folklore.” It’s a notable departure from Swift’s more commercial music in an attempt to focus more on her songwriting and art. Upon release, “Folklore” was met with widespread acclaim and commercial success. It is true that the album hasn’t spawned massive hits like Swift’s past projects, but the academy might want to honor this risk-taking entry in Swift’s catalog.

It would be Swift’s third Album of the Year victory, and she would join Frank Sinatra, Stevie Wonder, and Paul Simon as the only lead artists to achieve this three-peat. But a Swift win might be upsetting to the general public; her last win, for “1989,” was met with some backlash since it beat the aforementioned “To Pimp A Butterfly.” With this in mind, the academy will have to decide whether Swift really deserves another win so soon, or if it’s time to anoint another artist with this honor.

Other commercial blockbusters are in the hunt for nominations and maybe a win. Roddy Ricch’s “Please Excuse Me For Being Antisocial” would be the first hip-hop album to prevail since OutKast’s “Speakerboxx/The Love Below” 17 years ago. The album is led by the number-one single “The Box,” which is also primed for potential nominations and wins.

Another hit album in the hunt for a nomination is Post Malone’s “Hollywood’s Bleeding,” which is led by the number-one smash hits “Sunflower” and “Circles”; the latter is a major contender for Record and Song of the Year. Other big successes that could get into the Album of the Year race include Lil Baby’s “My Turn,” Luke Combs’s “What You See Is What You Get,” Summer Walker’s acclaimed debut “Over It,” Bad Bunny’s record-breaking “YHLQMDLG” (the highest-charting all-Spanish album of all time) and Dua Lipa’s “Future Nostalgia.”

Also entering the AOTY conversation is Harry Styles with his sophomore album “Fine Line.” While not a critical darling initially, its inclusion in Rolling Stone’s 500 greatest albums of all time list (which was voted on by fellow musicians and industry members) might preview how the academy feels about it.

On top of that, the album includes the hits “Adore You” and “Watermelon Sugar,” which are in the hunt for nominations in the general field and Best Pop Solo Performance, respectively. However, some voters might still see Styles as a teenybopper act due to his boy band past, which could hurt his chances. That said, “Fine Line” is quite in line with past winners sonically, so it could upset.

Some critically acclaimed albums that aren’t blockbusters could also end up in the race. The most notable is Fiona Apple’s “Fetch the Bolt Cutters.” It was met with incredible acclaim, becoming one of the highest rated albums ever on MetaCritic. On top of that, Apple has been around for nearly 23 years since her first Grammy win for her song “Criminal” in 1998, but she hasn’t won since despite multiple nominations. Voters might feel like it’s time to give such an influential artist an Album of the Year win.

That said, “Bolt Cutters” is definitely less accessible than other relatively non-commercial Grammy picks like Beck’s “Morning Phase” and Kacey Musgraves’s “Golden Hour,” which could cost Apple a victory. Still, you should watch out for “Fetch the Bolt Cutters” on Grammy night.

Other acclaimed projects vying for a win include Brittany Howard’s “Jaime.” Howard is a past Grammy winner and an Album of the Year nominee for her work with the band Alabama Shakes on “Sound and Color.” Another alternative nom might go to Tame Impala for their album “The Slow Rush.”

SEEGrammy flashback 10 years ago to 2010: Taylor Swift (‘Fearless’) wins Album of the Year at age 20, a record that just got crushed

R&B stars Chloe x Halle are also contenders for a nomination with their sophomore project, “Ungodly Hour,” which includes the hit “Do It.” Brandi Carlile’s supergroup The Highwomen might also nab votes from country and Americana voters for their self-titled album, and Run the Jewels’ “RTJ4” could be a dark horse with big acclaim, lots of passion and timely political messages.

Finally, past category winners who could return to the race this year include The Chicks with their comeback record “Gaslighter” and Bob Dylan’s grand masterpiece “Rough and Rowdy Ways.”