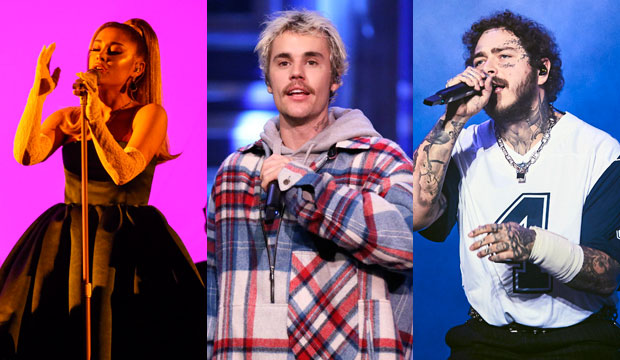 This year’s Grammys are highly competitive when it comes to nominations, despite the coronavirus pandemic that shut down so much of the entertainment industry. This year the pop field is stacked with commercially successful hits, A-list collaborations and multiple returning champs. So let’s take a look at the two performance categories.

Front-runners include Lady Gaga and Ariana Grande’s “Rain On Me,” which could win based on star power alone. However, “Rain On Me” isn’t quite the biggest hit in contention despite debuting at number-one on the Billboard Hot 100, which could hurt it. Ditto Grande’s other song in consideration, “Stuck with U” with Justin Bieber. It debuted at the top of the charts but didn’t spend long in the upper echelons of the Hot 100.

Similarly, another front-runner might be The Weeknd with “In Your Eyes (Remix)” featuring Doja Cat. While the song itself didn’t do as well as The Weeknd’s own “Blinding Lights,” hype for his “After Hours” album as a whole could translate to a nom.

Two big hits in contention by past category nominees are “Intentions” by Bieber featuring Quavo and “Memories” by Maroon 5. Both have found chart success, which could lead to a win. However, both songs, particularly “Memories,” might feel a tad old for voters, since both peaked relatively early in the eligibility period. Another roadblock might be these artists’ past Grammy history. A win for “Intentions” would be Bieber’s first in the pop field and Quavo’s first Grammy win ever. And though a win for “Memories” would be Maroon 5’s fourth, it would be their first in more than a decade: they last prevailed in 2018 with “Makes Me Wonder” in this very category.

Looking for their first nomination is boy band BTS with their hit “Dynamite,” their first fully in English and biggest song to date. BTS does have a big disadvantage, which is the Grammys relationship with boy bands and a possible bias against K-pop. No K-pop acts have been nominated yet, and though boy bands are sometimes nominated, superstar acts like the Backstreet Boys and NSYNC never won.

Besides BTS, superstar Jason Derulo is in contention this year for his smash hit “Savage Love (Laxed – Siren Beat),” with producer Jawsh685. Despite his long array of hits, Derulo has never been nominated for a Grammy Award, which could mean he’s overdue for a nomination. Will the academy overcome their biases and grant these stars their first noms?

There are other minor hits in contention, particularly Julia Michaels and JP Saxe’s “If the World Was Ending” and Taylor Swift and Bon Iver’s “Exile,” which are two very baity piano ballads from past Grammy contenders. We should also watch out for hits by new artists like Surfaces’ “Sunday Best” and Powfu and Beabadoobee’s “Death Bed.”

This race may not be quite as competitive as the race for duos and groups given the number of superstar artist collaborations over the last year, but a lot of big hits are still vying for spots in Best Pop Solo Performance.

Front-runners include The Weeknd with “Blinding Lights” (our current odds-on favorite to win Record of the Year and Song of the Year), Post Malone’s record-breaking “Circles” (more weeks in the top 10 than any song in Hot 100 history), Doja Cat with her funky “Say So,” Dua Lipa’s break-up anthem “Don’t Start Now,” Harry Styles’s “Watermelon Sugar” and Billie Eilish’s “Everything I Wanted.”

SEEBillboard Music Awards performers 2020: Who is performing at the BBMAs?

However, be aware of some lesser hits by established acts. Much like the past two years with Lady Gaga’s “Joanne” and Beyonce‘s “Spirit,” pop voters might be looking for songs by veteran pop stars even if they didn’t make the year’s biggest chart impacts. Taylor Swift’s chart-topper “Cardigan” seems like a surefire lock, and we also have Lady Gaga potentially returning with “Stupid Love,” her top-five lead single from her album “Chromatica.”

Some other contenders include emotional ballads like Kelly Clarkson’s “I Dare You,” Demi Lovato’s “Anyone” and Selena Gomez’s “Lose You To Love Me.”