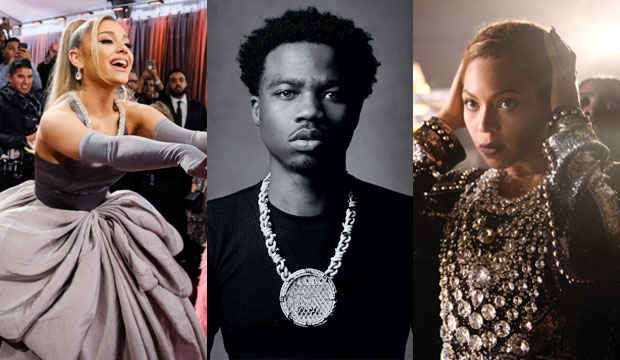 Artist collaborations have become so common in music that most of the songs that have topped the Billboard Hot 100 singles chart in 2020 have been team-ups. But despite musicians trading verses every which way, it’s rare for one artist to have multiple nominations for Record of the Year in the same year. But there are so many combos in the current race that we could potentially see a few repeats.

The only artist to show up twice in the same year to date was Pharrell Williams, who won as a featured artist on Daft Punk‘s “Get Lucky” in 2014 and was also nominated that year as a featured artist on Robin Thicke‘s “Blurred Lines.” This contest has many more double-dippers than that, starting with Ariana Grande and Justin Bieber. They could be nominated together for their quarantine duet “Stuck with U,” but both artists have other collabs in contention. Grande also joined forces with Lady Gaga on “Rain on Me,” while Bieber teamed with Quavo for “Intentions.”

Other pop stars with multiple chances include Selena Gomez (her own “Lose You to Love Me” and “Ice Cream” with Blackpink) and Dua Lipa (her own “Don’t Start Now” and “Un Dia” with J Balvin, Bad Bunny and Tainy).

In the world of rap remixes, Beyonce‘s contribution to Megan Thee Stallion‘s “Savage” could earn them a nom, and Queen Bey could strike again with her own single “Black Parade.” Hip-hop breakout Roddy Ricch boasts the two longest-running number-one hits of 2020 to date, and both are Record of the Year contenders: his own “The Box” (11 weeks on top) and “Rockstar” with DaBaby (seven weeks on top).

DaBaby himself is also entered as a featured artist on DaniLeigh‘s “Levi High.” Lil Baby is such a prolific collaborator he could be nominated up to four times: for his own “The Bigger Picture” and for guesting on songs by 6lack (“Know My Rights”), Iann Dior (“Prospect”) and Fredo Bang (“Get Even”). And the late Juice WRLD could make an impact with multiple collaborations: “Hate Me” with Ellie Goulding and “Come and Go” with Marshmello.

However, all artists with multiple songs up for consideration face the same challenge. The final nomination decisions in the top four general field categories are made by nomination review committees, and with so many eligible artists to review, they may balk at nominating any one artist multiple times. For instance, if they nominate Gaga and Grande for “Rain on Me,” as our odds currently predict they will, they may be less inclined to give another one of the precious eight spots in the category to another Grande duet.

Of course, it’s then a tough question of which song the recording academy chooses to nominate for the top artists under consideration. And it’s inevitable that some artists with multiple contenders will come away empty handed. That’s an even tougher call.