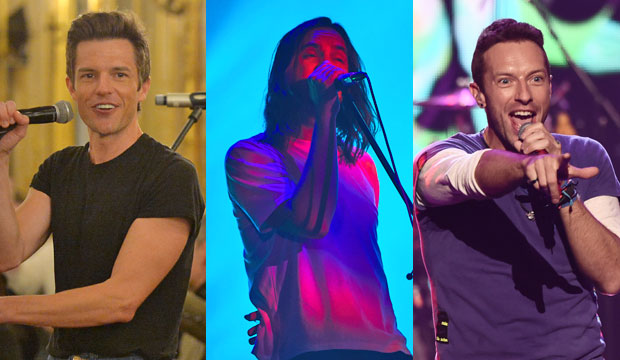 The Grammys’ rock categories are usually filled with interesting, though sometimes questionable, choices. This year in particular, the rock genre boasts a lot of noteworthy contenders ranging from hard rock to more Americana-inflected music. Let’s take a look at who’s in the hunt for Best Rock Performance and Best Rock Song nominations this year.

The Killers might be the front-runners with their hit “Caution.” The song was number-one on rock and alternative radio, and the band might be overdue for a Grammy at this point with seven past nominations and no wins. Joining them will likely be Brittany Howard with “Stay High,” which could earn her a win due to passion for her potential Album of the Year contender, “Jaime,” not to mention the fact that she’s been nominated five times before for Best Rock Performance, including a win for “Don’t Wanna Fight” in 2016 with her band Alabama Shakes.

Alternative crowd-pleasers Tame Impala are in contention for a nom here with their hit “Lost in Yesterday.” The song topped Billboard’s Adult Alternative charts, and peaked in the top-five on both the Hot Rock and Hot Alternative charts. Tame Impala had a very good year overall, notching a top-three album with “The Slow Rush,” and that love could translate into one or two wins. Similarly, The 1975 are in contention with the loud “People,” after their first Best Rock Song nomination last year. There’s also Bring Me the Horizon, whose “Parasite Eve” might be a big player. The band previously earned noms for Best Rock Song (“Mantra”) and Best Rock Album (“Amo”).

Women are having a phenomenal year too, and this could translate to a record number of women represented in the rock field. Sister trio Haim are in contention with “The Steps,” which was acclaimed upon release, and might be helped by writing and production from former Vampire Weekend member Rostam Batmanglij. Another acclaimed female artist bound to have a big Grammy year is Fiona Apple, whose “Shameika” could add another trophy to her collection; her one previous win was Best Female Rock Performance for “Criminal” (1998).

An additional past Grammy winner who could get a nom or two is Hayley Williams with “Simmer”; she previously won as a member of the band Paramore with the hit “Ain’t It Fun.” And female-fronted band Big Thief, who got a surprise Alternative Album nomination last year, could get their first song nomination with “Not” or “Forgotten Eyes.”

A few new artists have a shot at a nom or two for the first time here. British artist Rina Sawayama could get her first nom with the electric “STFU,” a single off her critically praised debut, “Sawayama.” Also in contention is internet sensation Joji with his haunting “Run” off his sophomore album “Nectar.” And British rocker Sam Fender could get love for his acclaimed album “Hypersonic Missiles,” perhaps with the title track.

SEEGrammys 2021: Rap field could include hits by DaBaby and Roddy Ricch, posthumous albums by Juice WRLD and Pop Smoke

Some pop stars are also looking to crossover to rock this year. Coldplay could return to the rock field for the first time since 2013 with their song “Orphans” off their album “Everyday Life.” There’s also Post Malone, joined by Travis Scott and Ozzy Osborne for their hit “Take What You Want,” which could sneak into Best Rock Performance as well. Finally, past pop champs Twenty One Pilots might score their second rock nom here with “The Hype.”

If the recording academy is in the mood to honor veterans, expect noms for Bob Dylan’s “False Prophet,” Weezer’s “Hero,” or Pearl Jam’s “Dance of the Clairvoyants.” But these two categories tend to bring a lot of surprises. Last year few really expected BonesUK to get a nom for “Pretty Waste,” and past nominees like Kaleo’s “No Good” and The Fever 333’s “Made an America” were also quite unexpected, so keep that in mind before nominations are announced on November 24.