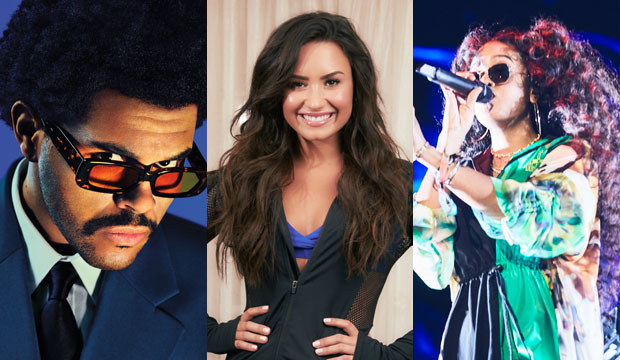 Unlike Record of the Year at the Grammys, Song of the Year is strictly for songwriters, and the rule of thumb usually is, if it’s not a lyrically unique song, an empowerment anthem, a love/breakup song, or a political song, it’s probably not getting a nomination. So with that said, expect Record contenders like “The Box” by Roddy Ricch, “Savage” by Megan Thee Stallion and Beyonce, “Dynamite” by BTS, “Say So” by Doja Cat and “Lost In Yesterday” by Tame Impala to miss here. But if not them, who can we expect to find in the race?

The Record of the Year winner often repeats in Song of the Year, so “Blinding Lights” by The Weeknd is probably the front-runner for the writing award too. However, could the nomination review committee think the song is too lightweight for Song of the Year? It’s definitely a possibility. “Don’t Start Now” by Dua Lipa and “Circles” by Post Malone are both solid contenders for a nomination and even a win, especially if the current perceived front-runner misses. Big hits tend to dominate this category, and both would make sense given their lyrical content about love gone wrong.

Maren Morris might get her first Song of the Year nomination for her country crossover “The Bones.” It’s typical SOTY fare, but Morris’s last album, “Girl,” failed to get major nominations, only landing her a nom for Best Country Duo/Group Performance. Perhaps this could help her, as the committee might feel that she was under-rewarded, but maybe it’s indicative of how the recording academy currently feels about the country singer. However, even though Morris herself hasn’t been nominated in this category before, she performed a song that was: her pop crossover “The Middle” in 2019. She may not have co-written that hit, but it shows she’s on voters’ radar.

But if not “The Bones,” then expect a country nomination for “Sleep at Night” by The Chicks; “Be A Light” by Thomas Rhett featuring Reba McEntire, Hillary Scott, Chris Tomlin, and Keith Urban; or even “Six Feet Apart,” a quarantine anthem by country superstar Luke Combs.

Taylor Swift might get her fifth Song of the Year nomination with “Cardigan,” the lead single from her acclaimed album “Folklore.” With “Folklore” having big hype and being a very Grammy-friendly album with great reviews, huge sales and a sophisticated pop sound, could Swift finally score her first Song of the Year win following losses for “You Belong with Me,” “Shake it Off,” “Blank Space” and “Lover”?

You can always expect thought-provoking songs in this category, so expect nominees that tackle racial issues. That could include Beyoncé’s “Black Parade,” Anderson Paak’s “Lockdown,” Lil Baby’s “The Bigger Picture,” H.E.R.’s “I Can’t Breathe” and Run the Jewels’ “Walking in the Snow.” Other lyrically-driven songs like “Murder Most Foul” by Bob Dylan, “Everything I Wanted” by Billie Eilish, “Underdog” by Alicia Keys, and “Shameika” by Fiona Apple could also pop up.

Other contenders we shouldn’t overlook include DaBaby and Roddy Ricch’s “Rockstar,” which does touch on police brutality, and it’s helped by a powerful “BLM Remix” and multiple live performances in which DaBaby has incorporated this more political aspect of the song. Another ROTY contender that could get a SOTY nom is Harry Styles’s love song “Adore You.” Additional Record contenders to keep an eye on are Lady Gaga and Ariana Grande’s “Rain On Me,” Brittany Howard’s “Stay High” and The Killers’ “Caution”.

Finally, there are always one or two personal ballads in the lineup, so keep an eye out for songs like the topical “If the World Was Ending” by JP Saxe and Julia Michaels, “Before You Go” by Lewis Capaldi, “Anyone” by Demi Lovato and “Lose You to Love Me” by Selena Gomez.