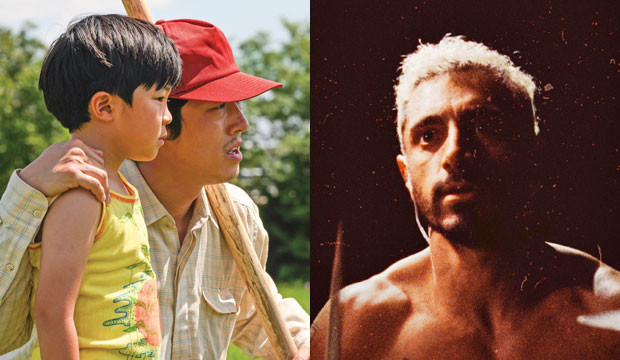 It’s rare to see actors of Asian descent represented in the Best Actor race at the Oscars, but this year there are two ranked among the top 10 contenders, according to our racetrack odds as of this writing: Steven Yeun (“Minari”) and Riz Ahmed (“Sound of Metal”). If either one of them gets in, it would be historic. And if both make the cut, it would be unprecedented.

Yeun plays a Korean-American father who moves his family to Arkansas to start a farm. He has never been nominated for an Oscar before, but he earned acclaim and multiple critics’ awards for his sinister supporting role in “Burning” (2018). Playing sympathetic patriarchs in family dramas has paid off before with nominations for actors including Will Smith (“The Pursuit of Happyness”), George Clooney (“The Descendants”) and Demian Bichir (“A Better Life”). And “Minari” has been a hit on the festival circuit, including dual wins at Sundance in January: the Grand Jury Prize and the Audience Award. If he’s nominated, Yeun would be the first Korean actor ever to be up for an Oscar.

Meanwhile, Ahmed stars in “Sound of Metal” as a heavy-metal drummer struggling to cope with his sudden deafness. There’s a storied history of actors winning awards for playing troubled musicians, including Best Actor Oscar winners Jamie Foxx (“Ray”) Jeff Bridges (“Crazy Heart”) and Rami Malek (“Bohemian Rhapsody”). Actors portraying the difficulties of disabilities are also popular with voters, though Ahmed’s performance of deafness isn’t as technically showy as past Best Actor champs Daniel Day-Lewis (“My Left Foot”) or Eddie Redmayne (“The Theory of Everything”). Ahmed recently made history as the first Asian performer to win a lead-acting Emmy (for the limited series “The Night Of”), and at the Oscars he would be the first acting nominee of Pakistani heritage.

Less than a handful of Asian performers have ever been nominated for Best Actor. Yul Brynner (1956’s “The King and I”) was the first; he was of Mongol descent. Israeli actor Topol (1971’s “Fiddler on the Roof”) was next. And most recent was Ben Kingsley, a Brit of Indian background, who won for “Gandhi” (1982) and was nominated again for “House of Sand and Fog” (2003).

Yeun currently ranks eighth in our Best Actor predictions with 33/1 odds based on the combined predictions of thousands of Gold Derby users. Ahmed is right behind him in ninth place with 48/1 odds. Both “Minari” and “Sound of Metal” are independent films where the biggest challenge would normally be just getting on awards voters’ radar, but this unusual pandemic-afflicted awards season means several big studio movies have been delayed. That could give smaller films a boost, especially intimate dramas like these that would play well for voters watching screeners from the safety of their homes. So while it’s a dire time for art-house theaters across the country, there are opportunities for art-house films like these to thrive.