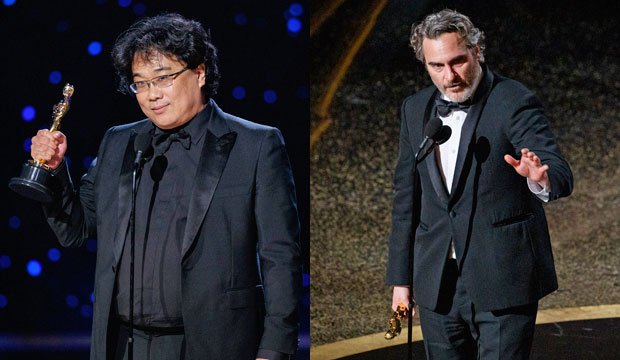 The 2020 Oscars telecast was host-less for the second consecutive year. But while last year’s ceremony was more of a daring experience, this year’s comparatively by-the-numbers event showed signs that the experiment might need to come to an end. Thankfully the ceremony was saved by a little historic Korean film, whose presence injected some much-needed joy and energy into an otherwise listless ceremony.

Janelle Monae began by serenading Best Supporting Actor nominee Tom Hanks (“A Beautiful Day in the Neighborhood”) with the theme song to Mr. Rogers’s eponymous children’s program. But that note of quiet gave way to a rousing opening number that was equal parts classic and progressive.

You had background dancers dressed in some of the nominated films’ costumes, while Monae called out the Oscars for their lack of diversity. It was certainly a political opening, but it was also reminiscent of those classic production numbers of previous Oscar telecasts. Monae even got several members of the audience, including Leonardo DiCaprio and Kathy Bates, to sing a few notes. It was a strong start that brought the audience to its feet.

SEEOscars 2020 winners: Best prediction scores by our Editors and Users

Unfortunately, that level of excitement did not continue throughout the ceremony. For much of the evening, the show lumbered on from category to category with very little to enliven the proceedings. The evening lacked connective tissue, as if the producers couldn’t settle on whether they wanted the ceremony to be modern or classic. They simply seemed to be dipping a toe into each, resulting in a ceremony that just seemed to be going through the motions.

Former hosts Chris Rock and Steve Martin’s short comedy segment early on hit many of the same notes you’d find in a host’s monologue. But their banter made one wonder why they weren’t just acting as hosts. If you’re not going to have actual hosts, then what was the point? As entertaining as they were, their bit seemed to just take up time between the opening number and the first award.

SEE3 big Oscars upsets: These winners took us by surprise, and yes, that includes ‘Parasite’

Other moments were equally perplexing. When Eminem emerged to perform a rendition of his Oscar-winning song “Lose Yourself” — replete with sound issues — you had to wonder what the point of that was too. If the Oscars wanted to salute the music of the movies, why this particular song at this particular time and not a medley of some of the movies’ other memorable classics? Or at least something that didn’t require excessive bleeping.

And speaking of musical performances, why did only Idina Menzel (‘Frozen II”) and Cynthia Erivo (“Harriet”) merit special introductions while Chrissy Metz (‘Breakthrough”), Randy Newman (“Toy Story 4”) and Best Original Song winner Elton John (“Rocketman”) got no introduction at all? They just started, apropos of nothing.

Meanwhile, there was certainly more than a hint of politics in this year’s ceremony, which enlivened the festivities. Accepting his first acting Oscar, Best Supporting Actor-winner Brad Pitt (“Once Upon a Time in Hollywood”) took a shot at Senate Republicans over their votes against witness testimony during the recently concluded impeachment proceedings. Best Animated Short winners Matthew A. Cherry and Karen Rupert Toliver (‘Hair Love”) highlighted the importance of representation and dedicated their win to the late Kobe Bryant, who won his own Oscar in the same category for 2017’s “Dear Basketball.” And can you imagine the unfiltered rage that the right wing will have over the standing ovation that greeted two-time Oscar-winner Jane Fonda before she presented Best Picture?

It’s likely that no speech will be the subject of more controversy than Joaquin Phoenix accepting Best Actor for “Joker.” He gave an entirely atypical speech that eschewed traditional thank yous, instead using his time to highlight both the fight against injustice and his devotion to animal rights.

SEEOscars live blog 2020: ‘Parasite’ is the night’s big winner with 4 including Best Picture in historic victory!

If the Oscars do decide to go back to hiring hosts in the future, the evening provided more than its fair share of options. Presenters Kristen Wiig and Maya Rudolph were genius as they attempted to showcase their talents to all the directors assembled in the room, delivering their banter in a range of dramatic styles from angry to weeping, and even throwing in their own a cappella medley.

Or perhaps multiple Oscar winner Bong Joon Ho (“Parasite”) could take up the mantle. Every time the Korean director took the stage he had the audience eating out of his hand. Whether promising to drink until morning or leading the audience in a standing ovation for fellow Best Director nominee Martin Scorsese (“The Irishman”), Bong was clearly the star of this year’s ceremony.

Really, Bong’s film was the star. In a history-making moment, “Parasite” became the first non-English-language film to win Best Picture. The audience applauded wildly, even forcing telecast producers to bring the lights back up after attempting to cut the acceptance speech off. Whatever one may think of the ceremony, at least it ended with a moment for the ages.