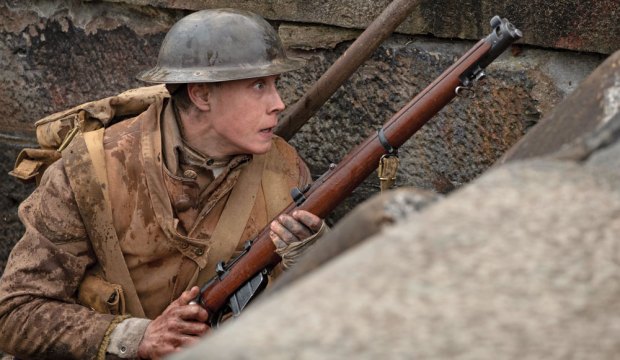 The World War I drama “1917” swept the BAFTA Awards on February 2, and we’re predicting similar success for the British film at the Oscars when awards are handed out on Sunday night, February 9. Scroll down to see our complete predictions listed by film. These predictions are based on the combined forecasts of thousands of Gold Derby users who have placed their bets here in our predictions center ever since the nominations were announced.

“1917” has 10 noms and is predicted to win 6 of them, three times more than any other film: Best Picture, Best Director (Sam Mendes), Best Cinematography, Best Sound Editing, Best Sound Mixing and Best Visual Effects. Its front-runner position is bolstered by its victories at the Producers Guild Awards, Directors Guild Awards and the aforementioned BAFTAs. It even earned a nomination from the Writers Guild and a Best Original Screenplay nom from the Oscars even though the film’s straightforward story and limited dialogue might have been overlooked.

But the race is closer than it might seem based on that predicted haul. “Parasite” is right behind it after its upset win for its ensemble cast at the Screen Actors Guild Awards, which have foretold a few Best Picture upsets over the years, including “Shakespeare in Love” (1998), “Crash” (2005) and “Spotlight” (2015). And it has become more and more common for the film with the most Oscars not to win the top Oscar: “Gravity” (2013), “Mad Max: Fury Road” (2015), “La La Land” (2016) and “Bohemian Rhapsody” (2018) ran the board in their respective years but didn’t take the Best Picture.

We’re betting on the motion picture academy to spread the wealth everywhere else. There are only three other films predicted to win multiple prizes: “Joker,” “Once Upon a Time in Hollywood” and “Parasite” with two wins apiece. Are we right? See how we think all 24 awards will be divvied up below, and make or update your own predictions here before Sunday night.

“Learning to Skateboard in a Warzone”
Best Documentary Short