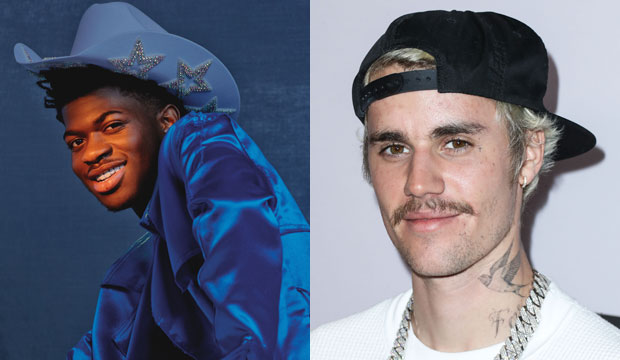 Two names you wouldn’t necessarily expect to see on the nominations list at the Academy of Country Music Awards are breakout rapper Lil Nas X and pop heartthrob Justin Bieber, but as music styles bleed into each other in this era when cross-genre collaborations are common, both are contenders for Music Event of the Year for teaming up with country artists on massive crossover hits. So who will win when prizes are handed out on September 16?

The blockbuster “Old Town Road” remix by Lil Nas X and Billy Ray Cyrus may seem like it was a long time ago, but keep in mind that these nominations were announced in March and the ceremony was originally supposed to take place in April. Then the COVID-19 pandemic forced myriad entertainment events to scramble, delay, or cancel outright, pushing the ACM Awards back by several months.

“Old Town Road” had won the 2019 CMA Award for Musical Event of the Year despite early controversy in the music industry about whether the song should qualify as country at all. So it’s no surprise that the song is out front at the ACM Awards as well with leading odds of 16/5 based on the combined predictions of Gold Derby users.

But “10,000 Hours” by Dan and Shay with Bieber was a more recent crossover success, released last October. It wasn’t as massive a hit as “Old Town Road” — hardly any song was that big — but it debuted at number-four on the Billboard Hot 100 and spent a whopping 21 weeks on top of the Hot Country Songs chart (“Old Town Road” had been controversially kept off the country chart).

It’s possible this more traditional country-pop collaboration will appeal more to ACM voters, as evidenced by the fact that it’s also nominated for Song of the Year and Video of the Year, while “Old Town Road” has no other nominations. So “10,000 Hours” ranks a strong second in our forecasts with 39/10 odds. Which song do you think will be the main event at the ACMs?

Who is performing at the ACM Awards 2020? List of performers at 55th Academy of Country Music Awards