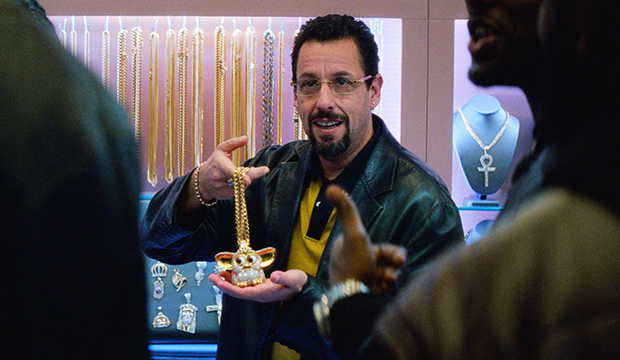 Adam Sandler had major Oscar buzz for his role as a gambling addict spiraling out of control in “Uncut Gems,” winning an Independent Spirit Award and earning nominations from the Critics’ Choice and Gotham Awards, among other plaudits. Now he has a chance to win again at the infamous kudos that have honored him the most: the Razzies, where he’s currently up for the Redeemer Award.

The Redeemer Award was created by the Razzies in 2014 to honor an industry figure who came back from Razzie-winning bombs to achieve critical and industry acclaim. To date it has been awarded to Ben Affleck for his one-two punch of “Argo” and “Gone Girl” (2014), Sylvester Stallone for his Oscar-nominated comeback in “Creed” (2015), Mel Gibson for directing the Oscar-nominated “Hacksaw Ridge” (2016) and Melissa McCarthy for her Oscar-nominated performance in “Can You Ever Forgive Me?” (2018).

In 2017, in the wake of the #MeToo movement, they didn’t give the Redeemer Award to an individual person, but rather symbolically to “A Safe Hollywood-Haven” to an industry starting to reckon with its history of abuses by men in power.

Sandler is best known for his comedies, which have usually been fan favorites even when they’ve been critically panned, and he has won Worst Actor three times, for “Big Daddy” (1999), “Jack and Jill”and “Just Go with It” (2011) and “That’s My Boy” (2012). He also won four other awards for “Jack and Jill,” which was the first film to win every single Razzie category: Worst Picture, Worst Actress (for playing his own twin sister), Worst Screenplay and Worst Screen Couple (for being paired with himself, Katie Holmes and Al Pacino).

“Uncut Gems” isn’t the first time Sandler has given a change-of-pace performance in an acclaimed film. He also received praise and awards buzz for “Punch-Drunk Love” (2002) and “The Meyerowitz Stories” (2017). But this is his first time up for a Redeemer Award, and he’s the front-runner to win based on the combined predictions of more than a thousand Gold Derby users, ranked just ahead of Eddie Murphy (“Dolemite is My Name”) and Jennifer Lopez (“Hustlers”).

That said, being redeemed by the Razzies isn’t always permanent. Stallone is nominated three times this year for “Rambo: Last Blood” four years after his redemption. And Tyler Perry was a Redeemer nominee for “Vice” just last year, and now he’s nominated five times for “A Madea Family Funeral.” So redemption can be fleeting, especially at the Razzies.