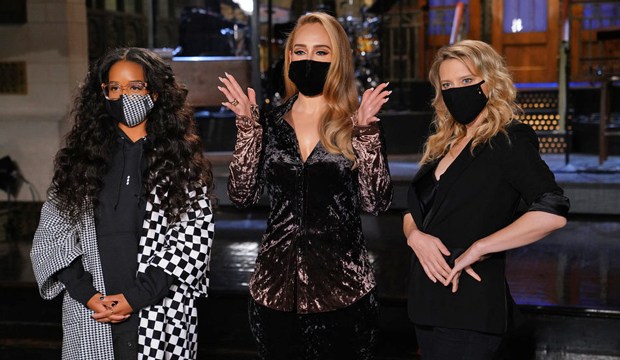 Music superstar Adele hosted “Saturday Night Live” for the first time on Saturday, October 24. She previously appeared as a musical guest in 2008 and 2015. Like tonight’s episode of the NBC sketch series, the 2008 stint coincidentally took place right before another presidential election. In her monologue, Adele addressed that 12-year-old episode, which she credits with breaking her career in the U.S. As she recalls, the episode featured then-vice presidential candidate Sarah Palin as a guest star, which brought a great number of viewers. “Sarah Palin, babe, thanks for everything,” she quipped.

Adele elected not to do double duty as musical guest for the night, as other singers have done in the past. Instead, fellow Grammy winner H.E.R. made her own “SNL” debut as the musical act for the night. Addressing why she is only hosting, Adele stated, “My album’s not finished, and I’m also too scared to do both. I’d rather just put on some wigs.”

The singer also touched on the noticeable change in her appearance. “I know I look really, really different since you last saw me, but actually, because of all the COVID restrictions and the travel bans, I actually travel a lot and I only brought half of me and this is the half that I chose,” Adele joked about her weight loss.

The monologue also included some fun cutaway gags, with Adele noting her tendency to swear even when she is told to keep it clean. We saw footage of her Glastonbury stint, with a montage of her bleeped out cursing. She also pointed out the big swear jar put in place for whenever she cusses in Studio 8H, featuring Kenan Thompson adding another dollar to an already-full jar.