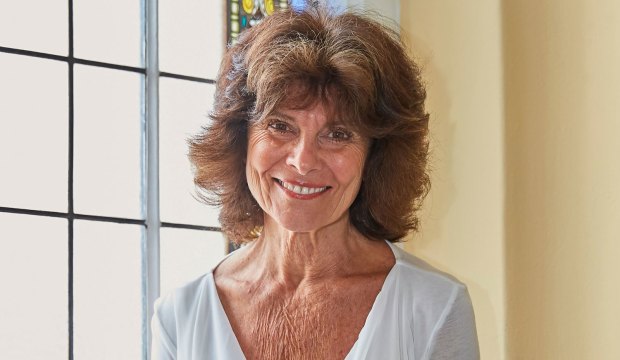 Adrienne Barbeau made a name for herself as a “scream queen” in former husband John Carpenter‘s horror/sci-fi films and as the daughter on Bea Arthur‘s award winning ’70s show “Maude.” These days she does animated voice-over work and video close captioning for a number of popular television shows. She talks candidly about her mentor Arthur, a possible reboot of the seminal TV series and how she’s coping with the current pandemic. She continues to work as an actress and has a new film released May 1, “For the Love of Jessee.”

Gold Derby: How are you holding up?

Adrienne Barbeau:  “I’m in my home in Los Angeles and I’m doing just fine. I’m fortunate because one of my voice-over jobs I’m still able to do from the house, so that keeps me a little busy. It hasn’t been as distressing for me as it has for so many others. One of my sons is here in the house and he’s a music producer so there’s a studio here. I have two dogs so they do give me an excuse to get out. I meet up with one of my sons and we walk — at a distance — so it’s okay.

GD: Tell me about your role in “For the Love of Jessee.”

AB:  “I play the mother of a doctor. He loses his wife in childbirth, and I’m his rather controlling and not obviously loving mother who comes to help and pass judgement on everyone.”

GD:  One of our Gold Derby contributors talked with Norman Lear recently and he expressed interest in bringing back “Maude.”

AB:  “I’ve heard that rumor, I haven’t talked to Norman in a while. It’s so timely right now.”

AB:  “I do video captioning for the blind and one of the jobs that I’m doing right now is ‘Mrs. America.’ I’m right back in 1972. That was our first year of ‘Maude.’ What has changed hasn’t changed for the better in many instances. So much of what we were dealing with then we are still dealing with now. So I think it’s a great idea.”

GD:  Well, if they reboot the show, how would you feel about stepping into the lead?

AB: “I would love to be the new Maude. Well, I would love to think that. I think Bea would be thrilled if it was resurrected because she cared so much about the show. I think she felt, as we all did, that we were doing something important. It’s on again finally after 40 years. For 35 years I never got a rerun residual check. Now they’re coming in, but you have to look to find the decimal point. [Laughs] They’re not big, but it’s airing. It would be fantastic with Norman at the helm. We had a lot to say that helped a lot of people.”

GD:  Do you think it’s gotten better for women in Hollywood since “Maude”?

AB:  “Yes, I do. I have two nieces. I remember going to see ‘Wonder Woman’ with Gal Gadot and walking out thinking ‘What an incredible time to be a young woman or to be the mother of a young woman, and to have these kind of role models now.’ And seeing it more and more. Maybe I was one of the early ones with ‘Swamp Thing,’ fighting the battles. But this is a good time.”

SEE‘Mrs. America’ could carry on this odd (and even!) pattern in the Emmys’ limited series category

GD: And the casting couch does not exist the way it did when you were starting out?

AB: “I would hope so. I mean nowadays no one even goes into an office for a casting session. Harvey Weinstein would have to stay 6 to 10 feet away. These days we just send our auditions in. So there is less of that I hope. I haven’t been subjected to it for many, many, many years. And even then I was fortunate, when I was in New York and doing stage, I had my experiences but I was maybe one of the fortunate ones here in L.A. It never affected me directly.”

GD:  Okay, back to “Maude.” It was nominated for a number of Emmys, Golden Globes and Comedy Awards. If you couldn’t be Maude, who else would you like to see in the role?

AB:  “I am so impressed with Tracey Ullman‘s work. She’s Betty Friedan in ‘Mrs. America.’ She’s the first one that comes to mind. They are big shoes to fill.”

GD: When the world resumes production, do you have anything that was interrupted that you’ll be returning to?

AB: “Hopefully later in the summer I will be on my way to New Zealand to work on John Cho‘s Netflix series ‘Cowboy Bebop.’ But there was an accident on the set and they had to shut down production. And I have two or three other movies in various states of post production. I think the next one is a fracking horror film.”

GD: Finally, what’s the best thing about the voice-over work you can do during this unusual time?