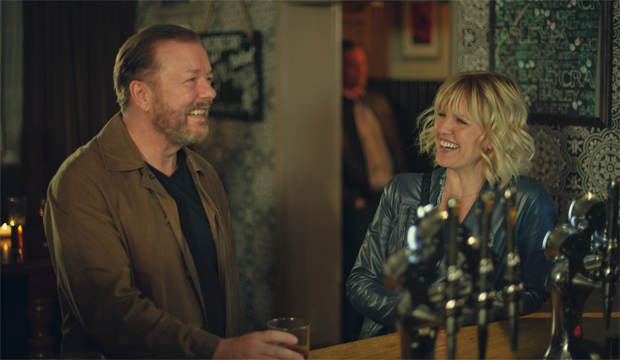 The 2020 Emmy ballots have been released by the Television Academy, so we now know which shows, actors, etc. are in contention for this year’s golden statues. Netflix’s comedy series “After Life” accounts for 10 entries on the performer ballot, including creator/writer/director/producer Ricky Gervais, supporting player Ashley Jensen and lead actress Kerry Godliman. Gervais, a two-time Emmy winner for producing “The Office” and starring on “Extras,” plays Tony, a journalist who essentially becomes a grief addict after his wife dies of breast cancer.

“It’s the most overtly grown-up and vulnerable I’ve been as a performer,” Gervais told Gold Derby after the critically acclaimed second season began streaming on Netflix. He added about his character, “He’s sort of addicted to grief, because hope has let him down too much. There’s a staple in comedy, particularly sitcoms, and that is an ordinary person trying to do something they’re not equipped to do. That’s what we’re laughing at. With Tony, he tried to make himself a bad-ass verbal vigilante. He tried to turn himself into a psychopath so he wouldn’t feel pain anymore, but he couldn’t because he’s got empathy and he’s got a conscience and he’s a nice bloke.”

SEERicky Gervais (‘After Life’): ‘It’s the most overtly grown-up and vulnerable I’ve been’ [EXCLUSIVE VIDEO INTERVIEW]

Here’s a closer look at the Emmy-eligible cast members and creative talents for “After Life” Season 2: