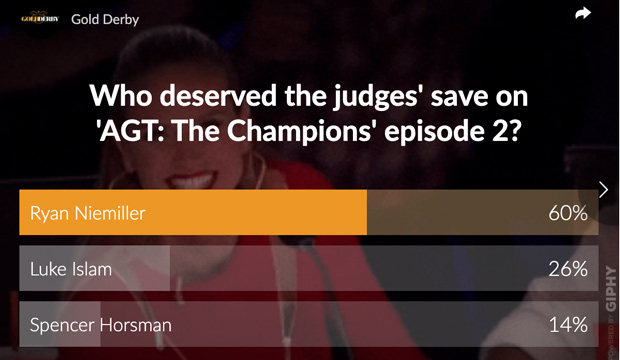 While fans of “America’s Got Talent: The Champions” are still upset with Simon Cowell for stealing Howie Mandel‘s Golden Buzzer, they at least agree on one thing: the judges made the right decision to save Ryan Niemiller in Episode 2. The stand-up comedian ended up as one of the superfans‘ third, fourth or fifth place acts along with Broadway singer Luke Islam and escape artist Spencer Horsman, which meant it was up to the judges to save one of them them. In a rare unanimous vote, Simon Cowell, Heidi Klum and Alesha Dixon all agreed to send Ryan through to the semi-finals; Howie Mandel‘s vote wasn’t televised but he likely chose Ryan as well since he’s a huge fan of comedians.

SEE‘AGT: The Champions’ judges buzz Ben Blaque off the stage before he nearly kills himself with crossbows [WATCH]

Rounding out our poll results, Luke came in with 26% and Spencer finished at 14%. Do you agree or disagree with your fellow “America’s Got Talent” fans that Ryan was the right person to send through to the next round? Sound off down in the comments section.

Ryan’s act on Monday night centered around his newfound fame and how people react differently to seeing him in person. Howie said it was a “Golden Buzzer moment” and that he was “brilliant.” Heidi thanked him “for being funny.” Simon proclaimed that Ryan “felt better tonight than [he] did on the main show.” And Alesha remarked simply, “So funny!”

The comedian’s life has changed dramatically since he came in third place on “America’s Got Talent” Season 14. Ryan joined winner Kodi Lee‘s Las Vegas show and, more importantly, no longer has to “drive five hours” to his next comedy gig. Even though Heidi is notoriously “harsh on comics,” he won her over on Monday’s episode with his hilarious stand-up routine.

The “AGT” superfans voted to send through falsetto singer Marcelito Pomoy and mentalist Marc Spelmann to the semi-finals, while dance group Boogie Storm made it through to the finals thanks to Simon’s [stolen] Golden Buzzer.