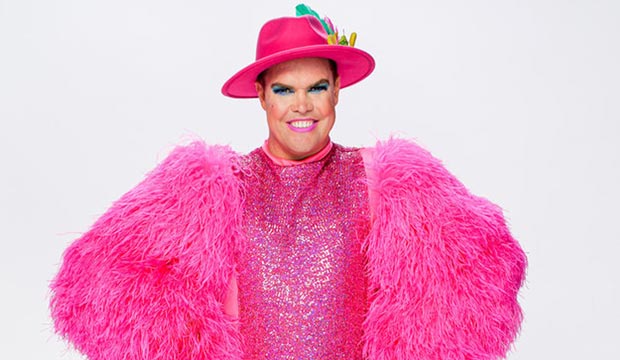 Simon Cowell sure was cranky during the Season 2 premiere of “America’s Got Talent: The Champions.” After all, he gave a red “X” to two acts: entertainer Hans and stand-up comedian Dan Naturman. However, Hans’ snarky comment following Simon’s buzzer actually caused the British judge to crack a smile: “You know what, Simon? When you let me back, I’ll come and sing, ‘I Dreamed a Dream’!” That was of course a reference to Susan Boyle, the former “Britain’s Got Talent” superstar who popped up in last year’s “AGT: The Champions” and sang her classic song for American audiences.

Despite Hans’ quick response, Simon didn’t seem at all entertained by the 35-year-old semifinalist from “America’s Got Talent” 2018. “It was almost impossible to make that worse,” Simon proclaimed while covered in pink confetti from Hans’ flamboyant singing-and-dancing act. “None of it made sense. Overgrown bananas, terrible singing, weird dancing.”

Hans’ biggest champion, Heidi Klum, tried to defend him when she said, “No, I love you! Honestly I feel like someone took all of my favorite things in the world, which is Germany, singing, danging, glitter, and made you. Who doesn’t love bananas? We love bananas!”

New judge Alesha Dixon shouted at her British boss, “You don’t have to take it so seriously, Simon. I felt good watching you. This is fabulous. You’re fabulous.” Howie Mandel added that he also “loved” Hans.

SEE‘America’s Got Talent: The Champions’ cast photos: Meet the 40 returning winners and favorites for Season 2

In our recent interview with Hans, he divulged, “I’m here as the people’s champion, darling. In a world full of Meghan Markles, I come back to this competition as a Princess Diana.” Hans has a plethora of talents to share with the world on the “Champions” stage, but his true heart lies with one judge in particular. “It’s painful when love is one-sided,” he confessed, “but this is the second chance for me on the show and it could be a second chance for Simon Cowell for the ride of his life.”