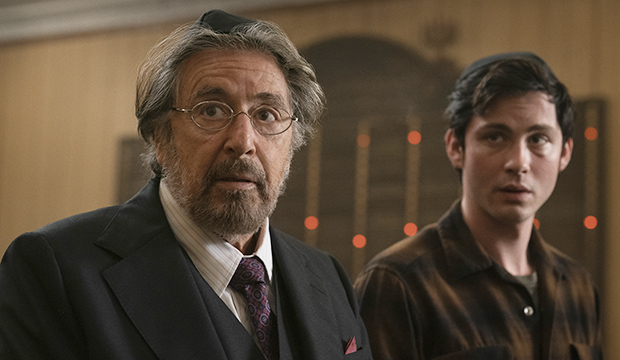 After coming to Netflix and receiving his first Oscar nomination in 27 years for “The Irishman,” Al Pacino might next receive an Emmy nomination for his new Amazon’s “Hunters.”

Executive-produced by Jordan Peele, “Hunters” marks Pacino’s first regular series role. Set in New York City in 1977, the show is inspired by stories that creator David Weil’s grandmother, a Holocaust survivor, told him when he was a child. It follows a group of Nazi hunters that springs to action after discovering that hundreds of high-ranking Nazi officials have set up base there and are planning to start the Fourth Reich. Pacino plays Meyer Offerman, who recruits Jonah Heidelbaum (Logan Lerman), a Jewish comic book shop clerk, to join the Hunters.

Asked what drew him to his first TV series at Tuesday’s Television Critics Association winter press tour, Pacino, who won Emmys for HBO’s “Angels in America” and “You Don’t Know Jack,” credited Weil’s script. “There’s kind of an originality in this show and it’s somewhat eccentric, and all of the sudden you’ll see it from certain angles. It isn’t just a dry thing. There are a lot of elements that will catch you off-guard and you can’t believe it, really.”

The vigilante series takes on a striking superhero-esque tone at times — a choice Weil made as that was how he processed his grandmother’s stories when he first heard them. And after all, superhero and comic book stories are often allegories for larger issues.

“When I was a young kid, hearing those stories my grandma would tell me, the only thing I could relate to were comic books and superheroes — these stories of great good but grand evil, the horrors of which are really difficult to even try to understand. So that became the lens through which I began to see these stories, the Holocaust,” he explained. “As I got older, I became a student of the Holocaust and my grandmother’s story — those poppy colors began to desaturate. I began to see the stark depraved realness of what happened, and I think you’ll see the show toes these different tonal lines, the kind of wish fulfillment, comic book superhero of it all, and the sobering, regretful portrayal of life in the camps.”

Added Pacino: “That’s part of [what] holds your interest because you never know when a joke is going to come. Sometimes it’s the joke and that was what really appealed to me when I read it. There was this element of things are not what they seem, they change, things happen. It allows for this breath.”

Since “Hunters,” which consists of 10 episodes the first season, is his first regular series, Pacino admitted that TV series production took some getting used to. “It’s a different environment for one thing. Every week or every two or three weeks, you get a new director. It’s a different adjustment,” he said. “But because it’s such a strong story, the players are together. They’re all there.

“It was a wonderful experience and I can’t say that about all the things I’ve done,” he quipped.