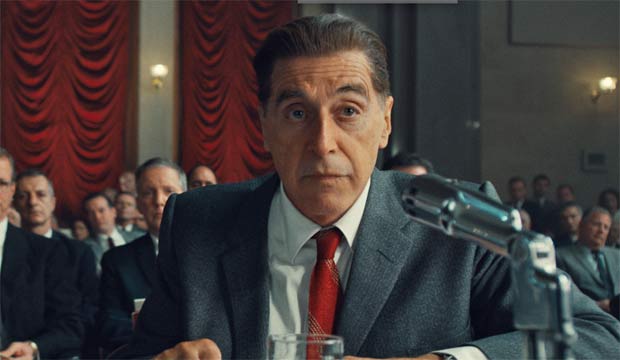 Al Pacino is a Hollywood legend, but while he has four competitive Golden Globes under his belt, it has been 27 years since he won for his work on the big screen. Now he’s nominated for Best Film Supporting Actor for playing doomed union leader Jimmy Hoffa in “The Irishman.” Will this be his Globes comeback?

Though Pacino is best known as a movie star, he has an even split of wins: two for film, and two for TV. His first Globe victory was Best Film Drama Actor for playing the title cop in “Serpico” (1973). Then he won that category again for the film that finally won him the Best Actor Oscar: “Scent of a Woman” (1992). But that was it for Pacino as a winner for film. After taking home the Cecil B. DeMille Award for lifetime achievement in 2001 he won Best TV Movie/Limited Actor for “Angels in America” in 2004 and “You Don’t Know Jack” in 2011, both of which won him Emmys too.

Brad Pitt (“Once Upon a Time in Hollywood“) is the current Globes front-runner according to the combined predictions of Gold Derby users, but one of the Expert journalists we’ve polled, Erik Davis (Fandango), is betting on Pacino. So is one of the Top 24 Users who got the highest scores predicting last year’s Globe winners for film, and two of the All Star Top 24 who got the highest scores when you combine prediction results from the last couple of years.

“The Irishman” is our current front-runner to win Best Film Drama. If we’re right, the Hollywood Foreign Press Association that decides the Globes might want to pair that up with a major acting award. Five of the last eight Globe winners in that top category also went home with an acting prize, and since Robert De Niro was surprisingly excluded from Best Film Drama Actor, this is the only category where the film’s performances can be recognized.

However, dual nominations for Pacino and his co-star Joe Pesci in this category could potentially hurt them both. If voters are divided between them, Pitt could be the beneficiary, especially since “Once Upon a Time” has just as many nominations as “The Irishman” (five) and this would be a convenient place to give that film an acting prize too. But don’t underestimate the power of a comeback like Pacino’s return to form in Martin Scorsese‘s gangster epic. Just when we thought he was out, they might pull him back in.