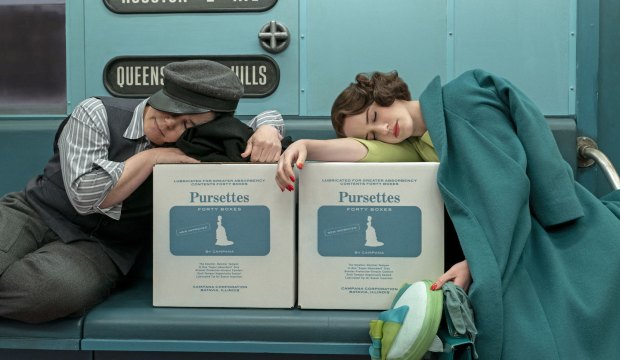 Alex Borstein has won two consecutive Emmys for Best Comedy Supporting Actress for her role as manager Susie Myerson on Amazon’s “The Marvelous Mrs. Maisel.” She’s nominated again this year, so can she pull off a hat trick in the category? Borstein has submitted the episode “Marvelous Radio” for Emmy consideration.

In the episode, Susie meets with Midge (Rachel Brosnahan) for a whirlwind day of radio ad recordings, a temporary means to sustain themselves while the Shy Baldwin tour is on hiatus; much to Susie’s chagrin, they are occasionally paid in lifetime supplies of tampons and maple syrup. Midge gets offered a live recording gig for extremist politician Phyllis Schlafly, but refuses to say the lines after learning about Schlafly’s racism. Susie quickly jumps in for Midge in an attempt to save the broadcast, but also concludes that “this woman is a monster.”

Later, Susie gets a surprise phone call from Sophie Lennon (Jane Lynch), who is excited about the buzz around her Broadway outing in “Miss Julie.” But during the opening night performance Sophie panics and finishes the play by falling back on her comedic persona. Susie chases Sophie outside and rips into her for trashing the performance and failing to have the guts to deliver on Broadway. She storms away from her now-former client.

Borstein’s final monologue is a tour de force. She tears into Sophie with a vigor that Susie rarely displays, exposing the comedian as a gutless fraud while also standing up for herself as a manager. Maybe it’s just the Broadway setting, but the actress’s gusto makes you want to leap up and give her a standing ovation. The fact that this is the final scene of the episode will make it stand out in voters’ minds.

The actress fits in so well with the fast-paced world of “Maisel.” Her performance in this episode is largely built on small moments and one-liners that make each whirlwind scene funnier. It’s in her complaint about syrup dripping down her pants and her stern placation of Miriam to just get through her lines and “I will buy you a hat.” Borstein is an expert at tossing away lines so fast you barely have time to register them before she has you laughing with another one. This rapid comedy provides a nice balance to the more dramatic episode conclusion mentioned above.

Borstein disappears for large chunks of the episode as the story pivots to subplots surrounding Abe (Tony Shalhoub) and Joel (Michael Zegen). While this is often to be expected for supporting roles, Borstein is nominated alongside contenders like Annie Murphy (“Schitt’s Creek”), Kate McKinnon (“SNL”), and Betty Gilpin (“GLOW”) who dominate their episode submissions.

Emmys love repeat winners, but only four women have managed three consecutive victories in this category: Valerie Harper (“The Mary Tyler Moore Show”), Rhea Perlman (“Cheers”), Laurie Metcalf (“Roseanne”), and Doris Roberts (“Everybody Loves Raymond”). That’s quite an exclusive club; will voters invite Borstein to join it when there are so many other nominees in this category who haven’t won an Emmy yet?