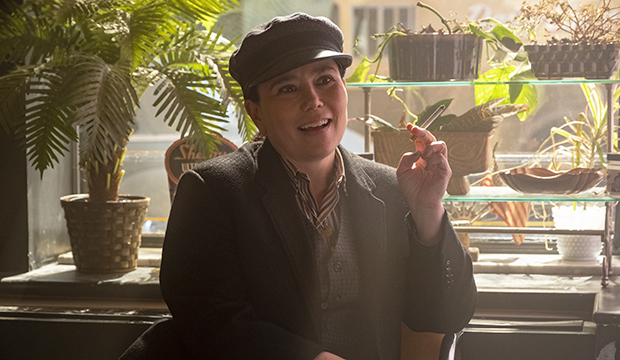 Given that Amazon’s “The Marvelous Mrs. Maisel” tied its own record for the most Emmy nominations for a comedy series with 20, why wouldn’t Alex Borstein boost her own chances to win a possible third supporting actress win for her performance as a dry-humored, crude, unisex-attired ball of energy known as Susie Myerson by speaking out about her role on the show. As stand-up comic Midge Maisel’s ever-loyal manager, the actress makes up for height with a large-sized personality. Her down-to-earth grit perfectly balances with leading lady Rachel Brosnahan‘s over-the-top girly-ness.

But Susie is often a mystery, like the time she just suddenly blurted out that she had a law degree. Or when she managed to charm two thuggish goons who were sent to threaten to kidnap. Instead, the three became fast friends after Susie tells them that she, too, is from the Rockaways, just like her would-be captors. Which is why it is interesting that Borstein sort of adresses a question about  whether she is asked a lot if Susie is gay in an interview via Zoom while quarantined in Spain — she lives in Barcelona when not filming in New York City — to the The Envelope at the L.A. Times.

Here is her reply: “One thing I like about her is she’s like this fleshy, new-formed baby. It’s interesting that a lot of people who want to know about her sexuality are the same people who would be like, ‘We don’t want to be labeled.’ I like that she’s never had the luxury of having a relationship or even exploring it. I wouldn’t be surprised if she’s never had her first kiss. She’s absolutely in love with Midge to some degree, but I think she falls in love with minds.”

The Advocate zeroed right in on her answer, writing that creator Amy Sherman-Palladino and husband Dan Palladino “have been criticized for failing to explore Susie’s inherent queerness considering that Midge and Susie are the perfect opposites-attract central couple for the series that is crafted and choreographed as one long musical film.”

Sheman-Palladino somehat addressed the differences between Susie and Midge as far as mid-century womanhood goes in a 2018 interview with Rolling Stone magazine, saying, “Susie is somebody, who, again, did not fit the times. She was not a beauty. Where did Susie fit in with the kind of clothing that she has and the views that she has? Ad the difference between Midge and Susie is: Midge has no idea that there are no boundaries for her. Susie is incredibly aware of every single boundary that has been put up. … Susie’s life is never gonna be find a husband, have some kids.”

What is even more interesting is when Borstein tells the Times interviewer that “There is a lot of Amy” in Susie.

Right now on Gold Derby’s combined Emmy odds, Borstein is way ahead of the comedy supporting-actress pack with a total 1,015 users picking her to win with 9/2 odds. Her closest rival is Annie Murphy from “Schitt’s” Creek with 393 votes and 5/1 odds.