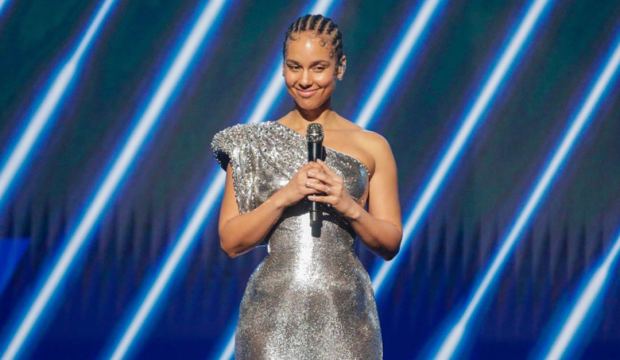 Alicia Keys was “great! Bring her back next year.” That’s what music fans said about Keys’s hosting performance at the 2020 Grammys, which were held on Sunday night, January 26, and broadcast live from the Staples Center in Los Angeles, California. Do you agree that she knocked her Grammy emcee duties out of the park? Scroll down to see our complete poll results.

More than half of the readers we polled (58%) said Keys should come back in 2021, which would be her third time as master of ceremonies. She first presided over the event in 2019, but her 2020 gig was arguably a lot tougher. Mere hours before the telecast it was reported that basketball star Kobe Bryant, who famously played for the LA Lakers at that very arena, had died in a helicopter crash at age 41. So as part of her opener she brought out R&B group Boyz II Men to perform an a cappella rendition of “It’s So Hard to Say Goodbye to Yesterday,” which was all the more impressive given how quickly it had to come together.

That’s also what makes Keys such a good ambassador for the music industry. As a 15-time Grammy winner, she can relate to the nominees in the audience waiting for their names to be called (or not called), and as a musician in general she can deliver her own tributes to the artists in attendance like this year celebrating the contenders to the tune of Lewis Capaldi‘s “Someone You Loved”; Capaldi gave her two enthusiastic thumbs up for that. And it’s a touching moment when, as a past Best New Artist winner herself, she passes the torch to the new winner — in this case, Billie Eilish.

SEEDemi Lovato (‘Anyone’) gave the best performance at the 2020 Grammys, according to music fans [POLL RESULTS]

But 32% of respondents said she was “just okay” and they “could take her or leave her.” On the plus side, though, that means only 10% said she was “terrible” and “should never host again.” You can’t please everybody. But it seems like Keys was pleasing to most. 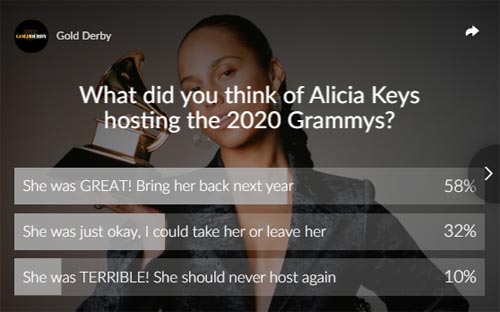