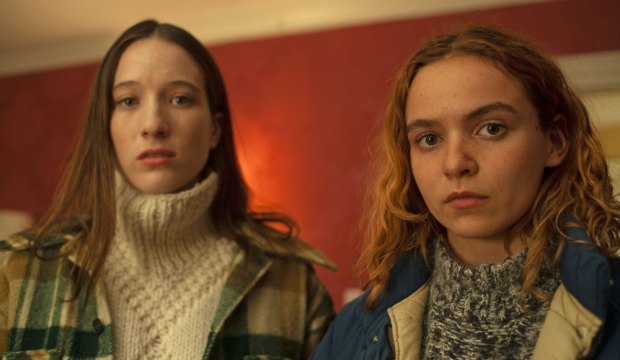 Given the real world pandemic outside of our doors, few of us will  be finding relief inside of a multiplex any time soon. But there is one gem on the horizon that you can easily watch from the comfort of your own home. The title? “Blow the Man Down,” a neo-noir set in the isolated fishing town of Easter Cove, Maine, in the dead of winter. It might seem like a snug and cozy burg filled with brawny men and salt of the earth women who regularly start their days and end their nights with a shot of whiskey. But the place is awash in crimes, misdemeanors and more than a few not-so-savory secrets.

After the buzzy film had its world premiere at last year’s Tribeca Film Festival. Amazon Studios scrabbled after the distribution rights soon afterward. It also screened at the Toronto International Film Festival. The plot kicks off with a funeral as a pair of young women known as the Connolly sisters mourn their mother and become fretful over their financial fate while running the family fish store in town. Soon after, both siblings become entangled with a dangerous man with disastrous results. And the wicked good plot expands from there.

SEEAmazon Prime Video schedule: Here’s what is coming in March 2020

There are at least seven reasons why you should make time to see this salty crime mystery, which lands on Amazon Prime on March 20, that boasts lots of chilly atmosphere and great performances to spare.  Just grab a bowl of clam chowder (New England, of course) and your adult beverage of choice while kicking back with a nice fire and a warm blanket.

1. The first-time female screenwriters-directors. Not too long into the film, I realized that Danielle Krudy and Bridget Savage Cole have the same flair for gruesome crime scenes as the Coen brothers, but with a female point of view. What the woodchipper was in “Fargo,” a harpoon is to this murderous saga. It no surprise that their script won Tribecca’s award for best screenplay in a U.S. narrative feature. As for the metal figure of a seafaring man in the heart of town, it just might be an homage to the freaky Paul Bunyan statue in “Fargo.”

2. The actresses playing the Connolly sisters. I don’t know if I have ever seen Morgan Saylor or Sophie Lowe before (see above), but they make for quite believable small-town sisters who will always have each other’s back. Saylor’s Mary Beth is a bit of a outgoing party girl and takes more chances while Lowe’s Priscilla is the more level-headed one, although her nerves can cause her to leave behind a tell-tale knife at a crime scene.

3. The glorious older female cast members. Yes, “Blow the Man Down” has multi-generational appeal with a cast featuring  June Squibb (Oscar nominee for 2013’s “Nebraska”), Annette O’Toole (an Oscar-winning songwriter for “A Kiss at the End of the Rainbow” from 2003’s “A Mighty Wind”) and the one and only Margo Martindale (a three-time Emmy winner, once for “Justified” and twice for “The Americans”).  Squibb, O’Toole and Marceline Hugot are respected town matriarchs and loyal friends of the Connolly sisters’ late mother and frenemies of Martindale’s local brothel madam. who ran the business with Mary Beth and Priscilla’s mom.

4.  Sea shanties, manfully sung. The tune that lends its name to the title is performed by burly and bearded fishermen as the movie opens. I don’t think I’ve heard a sea chanty since I last saw a Gorton’s fisherman ad or a Popeye cartoon. I think I kind of like them.

5.  Gayle Rankin (Sheila the She Wolf from “GLOW”). The actress plays one of Martindale’s working girls who becomes increasingly suspicious of her employer when the body of her best buddy roommate at the so-called inn washes up on shore. She gets a strong emotional arc that allows her to go from petulant angry child to fired-up vengeful adult.

6. Did I say THE Margo Martindale is in this?  With its quaintly old-fashioned jaundice-yellow chintz wallpaper that nicely sets off the multi-colored condoms in a fancy glass candy bowl in the brothel foyer, her Enid Nora Devlin is not one to want anyone to rock her boat with updated decor or rattle all the skeletons in her closet. She’s scheming, malevolent and deceitful until her own worst impulses get her in trouble.

7. FEMALE FILMMAKERS!!! Maybe the Oscars couldn’t squeeze a woman director or two among their feature-film contenders. But Krudy and Cole are the real deal and deserve the support of your eyeballs.

Will serving up her vulnerable side earn Tina Fey ('Modern Love') her 10th Emmy?

Amazon Prime Video schedule: Here's what is coming in November 2019

Amazon Prime Video schedule: Here's what is coming in October 2019

Margo Martindale ('Sneaky Pete'): Being the mother of all matriarchs is 'the perfect storm for me'…

Matthew Rhys ('The Americans'): 4 reasons why he could win Best Drama Actor at 2017 Emmys

Composer Nathan Barr ('The Americans'): 'I watch the show as a fan' [EXCLUSIVE VIDEO]

Keri Russell ('The Americans'): 4 reasons why she could win Best Drama Actress at 2017 Emmys