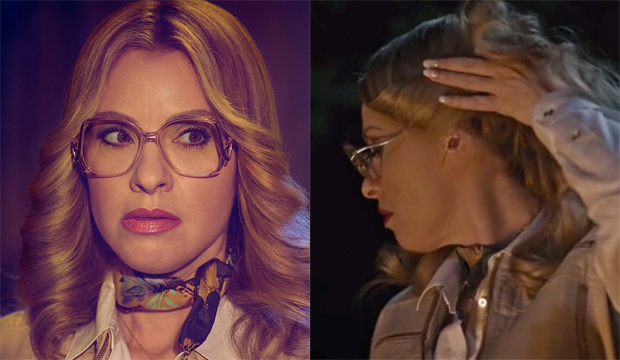 Margaret Booth is nominated for an Emmy … sort of.

When the 2020 nominations were announced on July 28, “American Horror Story: 1984” found itself with four bids, including two for makeup. The Emmy ballot goes into detail about all the hard work that went into the show’s makeup, including for the character of Margaret (Leslie Grossman), who memorably slices off her own ear. Alas, the actress herself was snubbed, but at least the makeup teams were recognized for crafting the grotesque scene.

This ninth season of FX’s horror anthology series aired last September-November and told the story of traumatized campers at the hauntingly tubular Camp Redwood. Besides its pair of makeup bids, “AHS: 1984” also earned nominations for sound editing and sound mixing. The winners of these four Emmy categories will be announced at the Creative Arts ceremony in September. (See details on “American Horror Story” Season 10.)

Best Prosthetic Makeup (Series)
Emmy ballot description: In true camp slasher fashion Prosthetics in this episode included all facets of the craft. Everything from transfer bullet entry wounds to a silicone tree impalement makeup thru the back of the head and out the mouth. We saw the aftermath of Chet’s Punji pit wound in his chest w/ a syringe stab followed by an on queue blood squirt. Hand laid hair. A progressive burn makeup from being shoved into an oven. Xavier’s silicone blisters baldies sheets and a lot of painting. Bertie’s severe beating and stabbing, a few camp counselors dispatched with extreme prejudice. As well as Margaret’s solid decision to cut her own ear off. On top of some more distinct makeups we stabbed, gutted and sliced our way thru this season of “American Horror Story: 1984.”