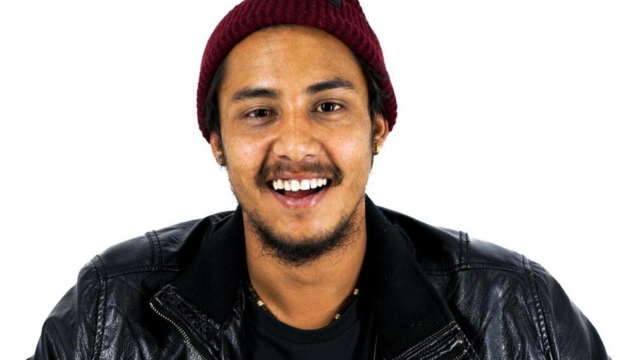 Arthur Gunn‘s life was changed forever when his “American Idol” audition of “Have You Ever Seen the Rain” by Creedence Clearwater Revival went viral. The 22-year old musician from Wichita, Kansas was born half a world away in Nepal, Kathmandu, but now he is one of seven artists in the running to become the Season 18 winner.

Gunn soared when he reached the Top 20, singing “Lovin’ Machine” and earned a spot in the Top 11. In the “Homeward Bound” episode he took on a John Denver classic with “Take Me Home, Country Roads” and once again felt the love from viewers who voted him into the Top 7. For his “Disney/Mother’s Day” double, Gunn performed “Kiss the Girl” and “Hey, Ma” in hopes of being voted into the finale.

“Music has always been my thing since I was young,” Gunn recalls. “I got my first guitar from my mom and then I started singing along to any song I heard on the radio or TV.” His sisters confirm Gunn’s lifelong passion for music. “Since he was two years old he was interested in music,” one says. “My mom used to get him small guitars so I remember him playing those and just singing random songs. Not even a full song but he would just pick apart songs and sing while playing the guitar. He has a God-gifted talent. Growing up, not even taking any musical classes, to see where he is today makes me very proud.”

“That’s when my dream started,” says Gunn. “After high school my family moved to America because it’s the land of great opportunity. Living in Wichita really got me into bluegrass and country. I hadn’t listened to that kind of music before, but I was pulled toward it like a magnet.” Gunn left the judges dumbfounded after his audition and Richie said,” You have no idea what this journey has in store for you. God bless you. You are the story that we need to tell.”

In Hollywood, Gunn continued to impress the judges with his unique take on classic songs like “Hard to Handle” by the Black Crowes. “More!” screamed the judges when he finished his performance, urging him to give them an encore. “He reminds me of Bob Marley,” says Richie. “The spirit that came off of that stage!”

After rearranging his original audition song to show off his true artistry in the solo round, Gunn had a place in the Top 40 and achieved one of his other dreams — going to Hawaii. “It’s amazing,” he says with a smile. “I didn’t expect to be this far and I’m still trying to grasp it all. My parents are here and my sisters. They haven’t seen me performing in a big show like this so I feel good about it.”

Gunn took Richie’s comparison to Marley to heart, singing the legend’s classic “Is this Love” for his showcase performance. The result was a standing ovation and hugs from his family. “They think it’s amazing,” he says about his family witnessing this journey. “All I’m doing right now is great. My parents worked really hard to raise my four sisters and me. I feel like I owe everything to them. Gunn’s mother couldn’t be happier. “I’m very happy that my son is on ‘American Idol’ and I’m very proud,” she gushes. Gunn is hoping to be selected as one of the five finalists to perform for America on the Sunday, May 17 finale. The other six artists hoping to compete are Dillon James, Francisco Martin, Jonny West, Julia Gargano, Just Sam and Louis Knight.