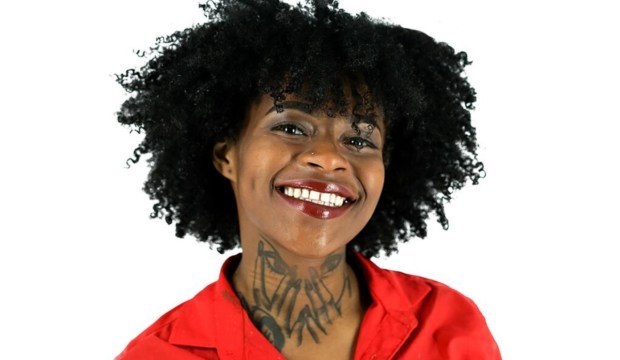 “I go by Just Sam,” says Samantha Diaz, a 21-year old contestant from Harlem, New York who was busking in the subway with hopes of becoming the next winner of “American Idol.” Now Just Sam is one of seven artists in the running to become the Season 18 winner.

Sam soared when she reached the Top 20, singing “I Believe” and earned a spot in the Top 11. In the “Homeward Bound” episode she took on a Bill Withers classic with “Grandma’s Hands” and once again felt the love from viewers who voted her into the Top 7. For her “Disney/Mother’s Day” double, Sam performed “A Dream is a Wish Your Heart Makes” and “I Turn to You” in hopes of being voted into the finale.

“Growing up I was kind of a tom boy,” Just Sam recounts. “I would switch up my style a lot. In high school they didn’t know what category to put me in. I wasn’t a girl, not a boy, but both. I’m like, just Sam, just Sam. You can’t tell them anything else. Just Sam. It sounds perfect, I think I’m going to use that as my stage name forever.”

Just Sam gave a soul-stirring rendition of “Rise Up” by Andra Day at her initial audition that floored the judges. When Lionel asked her if she ever felt safe in her life, Sam broke down responding, “I feel safe when my grandma hugs me. I’m not used to people caring without needing or pretending to care.” Lionel instructed her to rely on them to coach her through the process and forget about winning.

After snagging her golden ticket, Sam took her first trip on an airplane to Hollywood week. “I’ve always said I wanted to come to L.A. to just sing,” she says. “Even if I just sing by the stars and put my tip box out. Knowing that I’m here, I got on the plane, I’m emotional because I’m so grateful.” Sam had a rough go of it during her duet rehearsals in Hollywood, but every time she took the stage she rose to the occasion.

“I haven’t always felt confident in myself,” Sam admits. “Every time I perform, every time I walk onto the stage I feel supported by the judges.” And the talent that first started under ground carried her all the way to Hawaii where she shocked everyone with her Spanish performance of “Como la Flor” by Selena. Katy called her “the definition of elegance” and Sam revealed it was the first time she felt beautiful in a very long time. Sam is hoping to be selected as one of the five finalists to perform for America on the Sunday, May 17 finale. The other six artists hoping to compete are Arthur Gunn, Dillon James, Francisco Martin, Jonny West, Julia Gargano and Louis Knight.