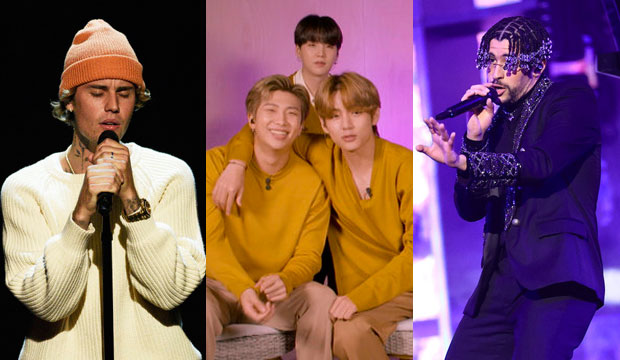 Some of the year’s biggest stars compete for prizes this weekend at the 2020 American Music Awards. So let’s take a look at who’s in contention for artist awards in pop/rock, Latin and New Artist fields.

The category this year is one of the strongest lineups we’ve seen in a while. We have three male rappers for the first time ever: DaBaby, Roddy Ricch, and Lil Baby. This is a fan-voted award, so they might suffer from vote-splitting if they share similar fan bases, but I wouldn’t be surprised if any of them came out on top. Ricch and DaBaby have both had number-one hits this year, and Lil Baby’s album “My Turn” is double-platinum.

Balladeer Lewis Capaldi is here thanks to his smash hits “Someone You Loved” and “Before You Go.” Similar to his aforementioned rap rivals, Capaldi’s audience might be overshadowed by some of his competitors’. However, he has a strong presence online with his quirky social media posts. Furthermore, he’s the only pop artist nominated, which might give him the edge against a field of mostly hip-hop musicians competing for many of the same voters.

Female representation this year comes from the top two contenders: Doja Cat and Megan Thee Stallion. Both have had incredible years, topping the Billboard Hot 100 and reaching the top 10 with their albums. Doja Cat might have the slight edge, bringing in fans from multiple genres (pop, rap, R&B), but Megan has a bigger social media following on the main voting platform, Twitter, where she has four million followers compared to Doja’s two million. Bet on one of these two to win.

Justin Bieber might have the edge given his passionate fandom. However, The Weeknd has had a phenomenal year with his number-one smash single “Blinding Lights” and album “After Hours,” so we shouldn’t count him out, especially since he just won the top prize at the fan-voted MTV Video Music Awards. Post Malone is also nominated, and has had an incredible year as well with his album “Hollywood’s Bleeding” and inescapable hit song “Circles,” so for him it depends on whether his voting audience is as big as Bieber and The Weeknd’s.

Taylor Swift will likely continue her streak in this category. If she wins this year, it would be her third in a row, and she’d break the record for the most wins overall with five. The other nominees are Dua Lipa and Lady Gaga, who appeal to a similar dance-pop audience and might ultimately split a lot of their votes.

A win for BTS is more than likely here given how insanely loyal their fan army typically is. Similar to Female Artist, the Jonas Brothers and Maroon 5 might appeal to the same adult contemporary audience, which could cost them a win against the K-pop juggernauts.

With the nominees being Anuel AA, J Balvin, and Bad Bunny, expect a win for Bad Bunny. The Latin superstar has had huge crossover success, notching three top 10 albums in 12 months on the Billboard 200, which produced multiple top-40 hit singles. Bunny has also taken most Latin prizes at other awards shows, fan-voted or not, so he should be pretty safe here.

This one is a little tricky. Superstar Karol G has arguably the biggest hit out of the nominees with “Tusa” featuring Nicki Minaj. However, Rosalía has also taken the world by storm, winning a Grammy and multiple Latin Grammys in the past year and notching a huge hit with “Con Altura” in 2019. Becky G also has had a lot of success, including two huge songs in the past few years with “Sin Pijama” and “Mayores.” Given the recency of her success, I’d give Karol G the edge, but it’s far from a lock.