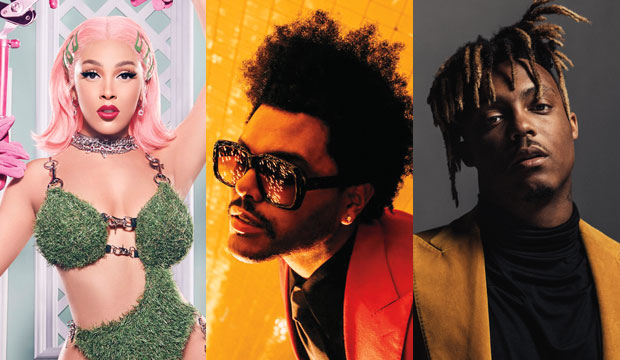 It has been a big year for hip-hop and R&B, with multiple career breakthroughs as well as returning favorites. So as we come closer to the American Music Awards ceremony on November 22, let’s take a look at the artists awards for these chart-topping genres.

This category could go multiple ways. Roddy Ricch probably had the biggest year out of the three, earning an Artist of the Year nomination, having multiple number-one hits, and releasing a number-one debut album, “Please Excuse Me for Being Antisocial.” DaBaby also had a pretty strong year, and his chart-topper “Rockstar” (featuring Ricch) is a bigger hit than most of his competition has released.

However, the late Juice WRLD has a passionate fan base, and sympathy over his untimely passing last December at age 21 might put him over the top. Not only that, he released a posthumous number-one album this year, “Legends Never Die,” with sales exceeding 400k units first week, more than Ricch and DaBaby, a strong sign of his popularity. In the end, Juice WRLD might win, a nice way to honor his short but impactful career.

If the above category was hard to predict, this one is three-times that. Cardi B, Nicki Minaj, and Megan Thee Stallion all have big fan bases, all have had number-one hits this year, and all have won awards.

Cardi’s “WAP” (with Megan) took the world by storm with its raunchy lyrics and video, but Minaj is not far behind, earning her first ever number-ones with “Say So (Remix)” with Doja Cat and the controversial “Trollz” with 6ix9ine. Megan Thee Stallion also earned a couple of number-ones with “WAP” and “Savage (Remix)” featuring Beyoncé.

Megan Thee Stallion might have a leg up since she’s newer and could attract enthusiastic fans. And the constant stan-war between Cardi and Nicki could divide their audience and cancel each other out. I’m going with Thee Stallion for this one, especially after she won Best Hip-Hop at the MTV Video Music Awards, which are decided by fans just like the AMAs.

This category is definitely between Chris Brown and The Weeknd (sorry, John Legend!). The Weeknd has had more mainstream dominance with his record-breaking single “Blinding Lights” and album “After Hours,” but Brown’s R&B fans are quite formidable. And Brown hasn’t had a shy year either, earning another top-10 hit with “Go Crazy.” That said, The Weeknd did beat Brown in 2015 in this same category, and his pop appeal might be too big to upset.

Newbies Doja Cat and Summer Walker are nominated alongside Jhené Aiko here. While it is true that Aiko and Walker’s albums did better in their first weeks than Doja’s “Hot Pink,” Doja’s single “Say So” is undeniably more popular than any other song from her rivals this year. And Doja Cat has cultivated a devoted online following. A win here is almost a lock for her (and might be accompanied by a win for New Artist of the Year as well).