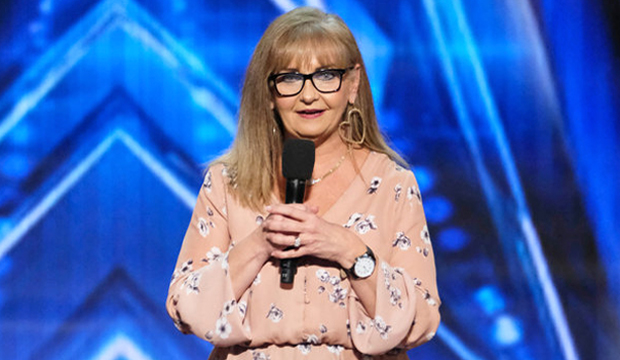 Every once in a while on “America’s Got Talent,” the judges simply get it wrong. This week they did just that when they eliminated 55-year-old comedian Christine Hurley after her audition because she temporarily froze on the stage. Howie Mandel and Heidi Klum voted “yes” to send her through to the next round, but Simon Cowell and Sofia Vergara voted “no,” ending her journey. Should the “AGT” judges reconsider their decision and give Christine a second chance in the form of a wild card spot? Vote in our poll below.

Christine’s routine started out well enough with self-deprecating jokes about her physical look being the result of “SlimFast mixed with vodka” and poking fun at her kids’ meal habits. But then she hit a snag when she messed up a punchline, calling her husband by his real name and confusing everyone instead of saying “my husband.” That mistake rattled Christine for a short while — “Oh, I screwed that up,” she sighed — but she ultimately gained her footing and finished off the set strong.

The judges were understandably rough on Christine for freezing on stage. After all, they’re looking for a million dollar act along the lines of Darci Lynne Farmer and Shin Lim (see the winners list). Heidi called her mistake a “glitch” and noted that she still liked the act. Sofia noted the performance wasn’t good enough for “America’s Got Talent.” And Simon said he’d seen “better” comedians so far, to which Christine quickly responded, “I agree.”

“Listen, you’re really funny,” Howie told Christine backstage after she received the bad news. “You have the cadence, you have the personality, you have everything. I can’t tell you how rough I’ve had it. Even now I go blank.” The Canadian funnyman called her mistake “human” and noted that she’s a “funny lady” and a “lovely lady” and he even gave her a hug — a big deal for the self-described germaphobe.

In his “AGT” live blog, our recapper John Benutty had this to say about the performance: “Christine Hurley also brought high energy to the stage. Her delivery was rapid fire and through the first half she had the panel and the audience rolling with laughter, but it caught up with her midway and she slipped up with a clunker of a punchline that completely threw her off. Though she was unable to recover, the judges were supportive. Howie gave her a yes, Simon gave her a no and Heidi gave her a yes, leaving the decision up to Sofia. Unfortunately Sofia went with no and so Christine was sent home without her second chance.”