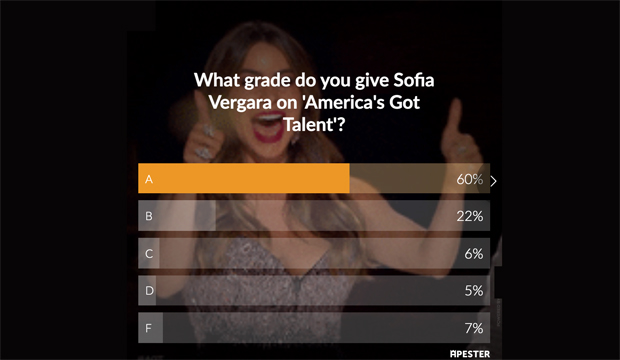 It’s official: “America’s Got Talent” fans really, really liked Sofia Vergara. In our recent poll, 60% of viewers gave the American-Colombian actress an “A” for her first season as a judge on NBC’s reality TV show. She joined Simon Cowell, Heidi Klum and Howie Mandel for the 15th season that concluded on Wednesday night.

SEEBrandon Leake (‘America’s Got Talent’): ‘I’m juiced’ about winning and will use money to help ‘advocate for justice’ [EXCLUSIVE VIDEO INTERVIEW]

Sofia received four Emmy nominations for playing trophy wife Gloria on “Modern Family,” but this was her first foray into the world of reality television. She was hired to replace Julianne Hough and Gabrielle Union on the judging panel, with Heidi returning to fill the other open seat after taking off the previous year.

The actress proved to be a perfect mix of humor, empathy and sophistication throughout the 2020 cycle, whether she was playing along with Brett Loudermilk‘s sword swallowing routine or mentoring her Golden Buzzer, child singer Roberta Battaglia. Unlike Heidi (who had a fever in the auditions) and Simon (who broke his back during the live shows), Sofia proved to be a welcome consistent figure this season as she appeared in every episode.

During NBC’s grand finale, Roberta made it all the way to fourth place based on her performance of Alessia Cara‘s “Scars To Your Beautiful.” America’s overnight votes declared spoken word artist Brandon Leake as the ultimate winner (watch our exclusive video interview), with singing duo Broken Roots as the runner-up and singer Cristina Rae as the third-place finisher. If you missed the finale, read our minute-by-minute live blog to see how it all went down.

There’s no word yet on what the “America’s Got Talent” judges’ table might look like for next year’s 16th season, but we have our fingers crossed there won’t be any major changes to the near-perfect panel of Simon, Howie, Heidi and Sofia, or host Terry Crews. Why mess with success?