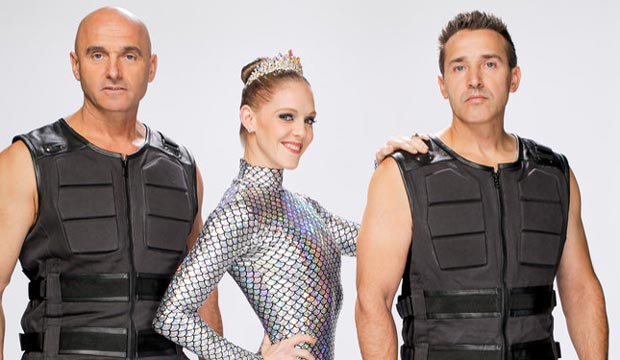 WTF, superfans! You really thought Sandou Trio Russian Bar was one of the top 2 acts of Monday’s episode of “America’s Got Talent: The Champions”? Sure the act is an exciting cross between acrobatics and danger, but is a blindfolded backflip worthy of a spot in the semi-finals? Watch the “AGT” performance above and then vote in our poll below.

For those unaware, the Russian bar is an acrobatic act involving a flexible bar that is a mix between a balance beam and a trampoline. The event tests an athlete’s balance, rebounding skills and general gymnastics through backflips and other moves involving the bar.

In their commentary, the judges referred to the act as the kind of dangerous talent that is thrilling to watch. Alesha Dixon said the act was “so impressive” and Heidi Klum loved watching a “strong, powerful, dangerous woman” that is “on top of it, a mom.” But perhaps it was Simon Cowell‘s comment that “this act had more relevancy than any other act we’ve seen on this show tonight.” He called out the “level of precision, music and staging” as key components of their performance.

Do you agree with Simon and the other judges that Sandou Trio Russian Bar was one of the best acts of the night and deserved to advance to the semi-finals?