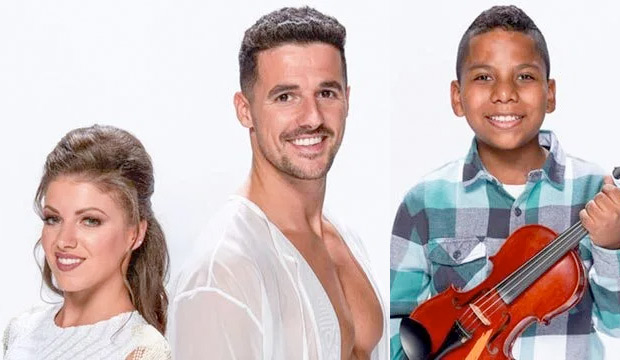 During the third episode of NBC’s ratings juggernaut “America’s Got Talent: The Champions,” the superfans, aka “delegates from all 50 states,” voted two acts into the semi-finals: acrobats Duo Destiny and violinist Tyler Butler-Figueroa. The dating couple originally won “Myanmar’s Got Talent” Season 11, while the child prodigy was a finalist on “America’s Got Talent” Season 14. Did the superfans get it right this week? In case you missed the episode, read excerpts below of their performances from our live-blogger John Benutty, and then be sure to vote in our poll.

This year’s competition welcomes back former winners, finalists and favorites from all around the world. The returning judges are Simon Cowell, Heidi Klum and Howie Mandel, while Alesha Dixon replaces Mel B on the panel. Last year’s host Terry Crews is also back in action. After the superfans made their two picks, the judges chose to send a third performer through to the next round: dog act Alexa Lauenberger. Howie’s Golden Buzzer pick, dance crew V.Unbeatable, sailed right through to the finals.

SEE‘America’s Got Talent: The Champions’ Season 2: Meet The 40 Returning Acts

The winners of “Poland’s Got Talent,” Duo Destiny knew that coming to “The Champions” would pit them against the best of the best in the world, presenting them with a bigger challenge than their original season. Tonight was their first performance in America and so it came it a ton of nerves. In their dance routine they incorporate balancing, flexibility, trapeze and death drops that make them seem like one of the most daring acts to perform. Heidi called their audition “sexy, romantic and breathtaking” and added that there was not one imperfection. Simon thought they were “astonishing” and even complimented their song choice–an uncharacteristically positive response from him tonight!

The next performer was Tyler Butler-Figueroa, the 12 year violinist who made it to the finals in the 14th season of AGT. In earning Simon’s Golden Buzzer last year, Tyler’s confidence has greatly improved as has his resolve to continue to inspire young kids all over the world. Tonight he performed to country music remixes alongside his troupe of backup dancers, all wearing overalls and cool flannel shirts. Alesha loved the musicality and the “swag” that Tyler added to the violin.