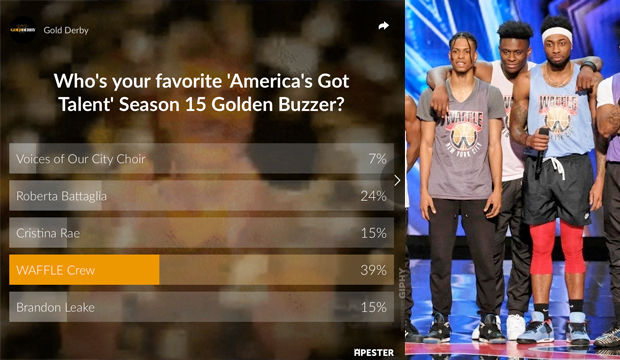 And that’s a wrap on the “America’s Got Talent” auditions for Season 15! Tuesday’s eighth episode was a “best-of” special featuring all of the most memorable acts from this 2020 cycle. Among those shown were the five Golden Buzzer acts, which were showered with golden confetti when the judges (Simon Cowell, Howie Mandel, Heidi Klum and Sofia Vergara) and host (Terry Crews) felt emotionally moved. All five acts now to get skip the upcoming Judge Cuts round and head straight to the live shows. In our recent poll we asked “AGT” viewers to name their favorite Golden Buzzer act, and here are their complete rankings:

SEE Will an animal act win ‘America’s Got Talent’ for the first time in 8 years? Only Olate Dogs have prevailed so far

Do YOU agree or disagree with your fellow fans’ poll results? Be sure to sound off down in the comments section. Also check out our definitive photo gallery of all of the Golden Buzzers throughout the history of “America’s Got Talent.”

Simon initially disappointed the seven members of WAFFLE Crew on the June 16 episode of “AGT” because he started his critique by saying he wasn’t a fan of these types of performances. “We’ve seen a lot of dance acts on this show … I’ve seen a lot of repetition over the years,” Simon began. “But I think something about your energy from the second you came on and your determination… everything. This was, I think, my favorite audition so far.” Cue the confetti explosion.

At only 10 years old, Roberta Battaglia made history on “America’s Got Talent” by becoming new judge Sofia’s first-ever Golden Buzzer act. This Toronto, Canada native started singing when she was only three years old and credits her father with her impressive singing voice. “When I was little I would watch [‘AGT’] and I would say, ‘Oh my gosh Mom, I want to be there one day,’ and here I am now!” Roberta told Terry before her big audition during the second episode.

Soul singer Cristina Rae became Heidi’s Golden Buzzer on “America’s Got Talent” just before she took ill and had to stay at home. Cristina, whose son Jeremiah accompanied her from Nashville, Tennessee, had a rather tumultuous audition thanks to none other than Simon. The British judge didn’t seem to fall in love with her original song choice, “In the Air Tonight,” so he made a shocking request: sing something else! Luckily, Cristina had “Gimme Shelter” at the ready as her “encore” performance and the rest is history.

If you’re unfamiliar with spoken word poetry then it’s about time you got into it! On the June 30 episode, “America’s Got Talent” showcased its first ever act of the art form and Howie was so moved by it that he awarded its artist, Brandon Leake, with his Golden Buzzer. When Brandon finished his audition about his deceased sister, the already empty auditorium (thanks, coronavirus!) was quiet, but Howie was the first to stand and clap, uttering a simple “wow.”

Terry immediately felt a personal connection to Voices of Our City Choir, as he was also saved by the arts at a young age. The San Diego choir’s mission statement is to not only provide goods and services back to the homeless community of San Diego, but also to feature that under-represented group of people as the vocalists. The group performed an original tune, “Sounds of the Sidewalk,” with Terry declaring, “I was just sitting there full of emotion after seeing this beautiful rendition of an original song.”