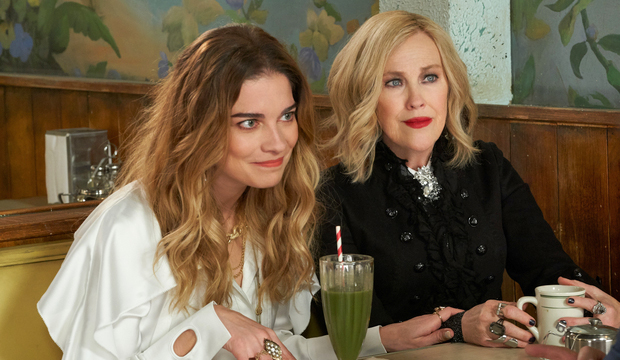 According to Gold Derby’s 2020 Emmy odds, Annie Murphy (“Schitt’s Creek”) is currently in second place to win Best Comedy Supporting Actress. Hmm, only second place? As her spoiled character Alexis Rose might screech, “Ew, David!” The predicted winner, Alex Borstein (“The Marvelous Mrs. Maisel”), has already claimed back-to-back trophies in 2018 and 2019, so it’s no surprise to see her leading the category yet again. But I think we’re all underestimating Murphy’s chances. Below, see my top four reasons why she’ll beat the odds on Emmy night.

1. She’s on the rise
A year ago many Emmy voters had never even heard Annie Murphy’s name. In fact, “Schitt’s Creek” was snubbed for its first four seasons before finally breaking through in 2019 with four bids, including Best Comedy Series. But Murphy was left off the list. This year that all changed, with the Canadian actress receiving her first Emmy nomination for the final season of the Pop TV hit. Not long after the show wrapped she was cast as the lead in AMC’s dark comedy “Kevin Can F— Himself,” proving she’s a star on the rise.

2. She plays a silly billy
Looking through the history of this Emmy category, the winners tend to be silly, wild characters who steal every scene they’re in. Think Kate McKinnon (“Saturday Night Live”), Allison Janney (“Mom”), Jane Lynch (“Glee”), Megan Mullally (“Will & Grace”) and Lisa Kudrow (“Friends”). As Alexis, Murphy gets to show off her range as a previously spoiled brat who now strives to make the best of her life in a small town. It’s exactly the kind of over-the-top, yet lovable, character that’s tailor-made for Emmys.

3. She’s really a lead
Unlike her co-nominees in this category, Murphy is essentially a lead actress on her program, which means she’ll have more of an impact on Emmy voters. The core four cast members — Eugene Levy, Catherine O’Hara, Dan Levy and Murphy — all share equal screen time on “Schitt’s Creek,” though for obvious reasons she and Dan Levy decided to campaign down in supporting at the Emmys. Over at the Canadian Screen Awards, all four stars competed as leads and were frequently nominated, with Eugene Levy and O’Hara winning repeatedly.

4. It’s her last chance
What do Phoebe Waller-Bridge (“Fleabag”), Matthew Rhys (“The Americans”), Jon Hamm (“Mad Men”) and more have in common? They all won their first career Emmys for the final seasons of their shows. At Gold Derby we often talk about voters giving a “farewell hug” to departing series as a sort of final salute, and this trend continued last year in both drama (“Game of Thrones”) and comedy (“Fleabag”). “Schitt’s Creek” fits that bill perfectly at the 2020 Emmys. In fact, we could see it sweep the comedy categories by winning every major race on Emmy night, including for Murphy.