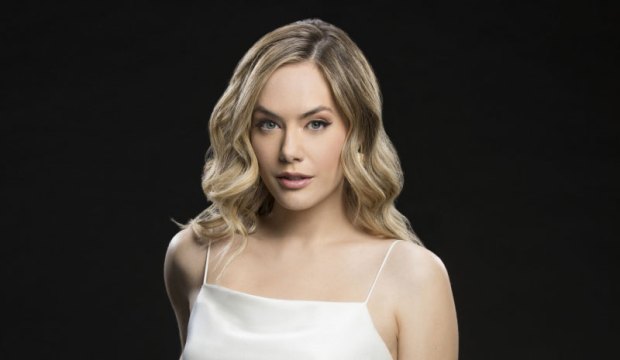 “I really tried to tell a story. I really tried to show an arc of that 8-9-month saga, and luckily, I had the material to choose from to do so,” said “The Bold and the Beautiful” actress Annika Noelle in a recent interview with Michael Fairman about the scenes she submitted for her Daytime Emmy reel. That reel, which tracks the trauma and shock her character Hope experienced during a baby switch storyline, earned her her first nomination for Best Supporting Actress. Could it make her a winner too?

“I submitted as the initial scene when Hope finds out [that her baby daughter Beth died],” Noelle explained. “Then, the second scene I submitted was where she is kind of emotionally checked out, and then, Sally [played by Courtney Hope] comes in with that poor puppy dog to try to cheer her up … The third scene was on the rooftop where Hope finally finds out that Beth is indeed alive, and that Thomas has been lying to her. Then, the fourth scene was … this really quiet, intimate moment between Liam and Hope when they’re alone with Beth again for the first time as a family … The final scene was where Hope gets to slap Flo [Katrina Bowden] and you get to see the momma bear come out.”

She chose those scenes to show a range of emotions and give voters a sense of the entire story arc. That paid off with the first bid of her career after taking over the role of Hope in 2018. But the man she shared many of her scenes with, Scott Clifton as Liam, didn’t submit himself for consideration despite three past wins. “I thought he should have submitted himself this year,” she told Fairman. “It’s amazing the work that he did, and he was right by my side every step of the way during this incredibly difficult storyline, and honestly, I could not have done it without him.”

However, her on-screen mom Katherine Kelly Lang was entered for consideration and earned a nomination for Best Actress. “I’m praying it’s her year,” Noelle said, “and Heather Tom [as Hope’s aunt Katie] also did such beautiful work with the kidney storyline, and Thorsten Kaye [as Hope’s stepfather Ridge] just broke my heart with the divorce and the Thomas storylines. It’s kind of all in the family in a way with our characters, but everyone did such beautiful work, and I’m rooting everyone on.” Read the rest of her interview here, and predict whether you think she’ll take home the gold here in our predictions center.