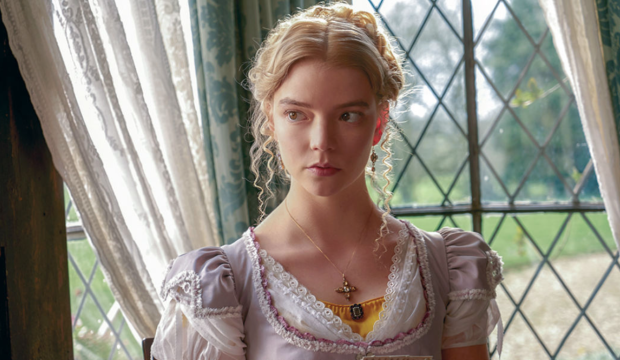 When Anya Taylor-Joy’s “Emma” sauntered on to our cinema screens earlier this year, it wasn’t the first time audiences experienced the story of Jane Austen’s meddling heroine. Gwyneth Paltrow previously embodied the role in a 1996 film version. That original incarnation had a decent reception at the Oscars, but the 2020 update is poised to perform even better.

The 2020 adaptation from Focus Features has one major factor boosting its chances. The film debuted in theaters on February 20, 2020. That was just a couple weeks before the coronavirus pandemic shuttered movie houses around the country. “Emma” was indeed the last film I saw in theaters, and I imagine the same is true for many industry professionals. In a chaotic year where films either had to postpone a theatrical run or head straight to video-on-demand, “Emma” will likely stick out in voters’ memories as one of their final movie theater experiences of 2020.

As far as the Oscars go, the 1996 “Emma” reaped two bids: Original Musical or Comedy Score for Rachel Portman, and Costume Design for Ruth Myers. Portman won her race for Score. Winning Best Score might be more difficult for the 2020 entry, as the category is no longer split between “dramatic” and “musical/comedy” scores. This time around, the music is courtesy of David Schweitzer and Isobel Waller-Bridge. Granted, they are not the celebrated veterans that the music branch usually likes to name check in this category. However, last year’s Score winner Hildur Guonadottir (“Joker”) proves that the branch is willing to look outside the box.

Costume Design might be a much easier nomination to replicate, and perhaps even pull off a win. Alexandra Byrne is responsible foro the 19th century gowns in the film, and this type of period fare is usually catnip to voters. It also helps that Byrne has reaped five Oscar bids for “Hamlet,” “Elizabeth,” “Finding Neverland,” “Elizabeth: The Golden Age,” and “Mary Queen of Scots.” She won for “Elizabeth: the Golden Age.”

“Emma” also looks like a strong contender in the Makeup & Hairstyling category. Hair and makeup designer Marese Langan is a BAFTA winner for “The Iron Lady,” and could find herself a first time Oscar nominee thanks to the impressively detailed hair in the movie. We should also look out for the film to pop up in Production Design for its grand interiors.

Precedent doesn’t hold as much favor for acting nominations, as no one from the original film cast was cited. In 2020 film, Bill Nighy makes a delightful appearance as Emma’s father, constantly running from a “deathly draft” that permeates his old manor. Though he may not have enough material to ultimately register with Oscar voters. If there is any justice in the world, Miranda Hart would be remembered for her hysterical, and ultimately heartbreaking supporting turn as Miss Bates. She not only gets the funniest lines in the film, but is also at the core of Emma’s change in character.

As for Anya Taylor-Joy in the title role, the actress sits well back in our odds for Best Actress. That speaks to just how competitive the lineup is this year, but perhaps readers should rethink including her in their predictions. Her star has been on the rise since her breakout role in “The Witch.” She quickly amassed a diverse resume, including a super powered girl in M. Night Shyamalan’s “Split” and “Glass,” voicing a heroic gelfling in “The Dark Crystal: Age of Resistance,” and embodying a chess wunderkind in the limited series “The Queen’s Gambit.”

“The Queen’s Gambit” could provide a renewed surge of support for the actress, which could help propel her to the Oscars. Her role of chess player Beth Harmon is wildly different from Emma Woodhouse, and voters love to reward a burgeoning star who is showcasing their range.

The Golden Globes might be the most important precursor for the performer. Taylor-Joy’s “Queen’s Gambit” role sits in sixth place in our combined odds for Movie/Mini Actress at the Golden Globes. And thanks to a drama/comedy split in the movie categories, the young star is currently predicted to clinch a nomination at that ceremony for Comedy/Musical Actress for “Emma.” Should she pull off these double Golden Globe bids, it would be difficult for Oscar voters to not pay attention to this versatile actress.