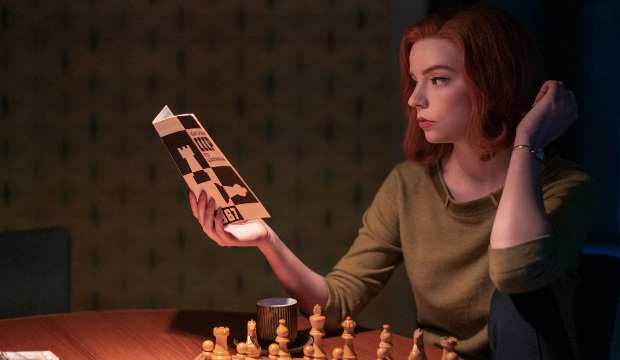 “The Queen’s Gambit” star Anya Taylor-Joy has been climbing in Gold Derby’s combined racetrack odds for a Best Movie/Limited Actress nomination at the Golden Globe Awards. She is now on the cusp of cracking the top five, having ranked a mere 15th just over a month ago for her lead performance as fictional 1960s chess prodigy Beth Harmon.

The seven-episode miniseries co-starring Marielle Heller and Bill Camp debuted on Netflix on October 23 and became the most-streamed show on the service in the United States the next day, a position that it has held every day in the three weeks since then. FlixPatrol reports that its reign on the worldwide chart began four days later.

Buzz from advance reviews propelled Taylor-Joy into the top 10 by the program’s release, although she continued to yield lowly 100-to-1 betting odds at the time. She edged “Normal People” breakout Daisy Edgar-Jones out of sixth place on November 9 and now boasts 16-to-1 odds. Taylor-Joy ranks only ninth in the equivalent race for the Screen Actors Guild Awards, which has been less receptive to breakthrough starlets in this race, but she has come a long way since beginning the season in 34th.

Taylor-Joy has the raves to warrant a nomination — the period piece’s commercial success is a credit to her performance, which Variety‘s Caroline Framke reviewed as both “magnetic” and “mesmerizing.” The Hollywood Reporter‘s Daniel Fienberg wrote that she “has an astonishing versatility, conveying a character in flux by rarely looking or carrying herself identically from scene to scene.” IndieWire’s Ben Travers explained about her work, “Taylor-Joy trusts the character, the context, and her own command to keep viewers enamored, and it works beautifully. […] It’s so natural it’s easy to overlook, but growing up onscreen is hard, precise work and this young talent makes it look easy.

“The Queen’s Gambit” has been so roundly praised that its 8.8 rating on IMDb puts it 56th on their list of highest-rated television programs ever. One of the few mixed notices came from Rolling Stone critic Alan Sepinwall, but even he highlighted Taylor-Joy’s “excellent” acting, saying that her “sheer charisma and range go a very long way” to the point that she “pops in every scene.”