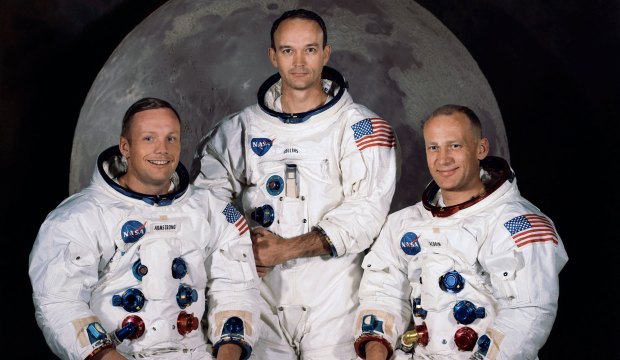 It’s with no disrespect to any of this year’s other Emmy-nominated cinematographers that I say no one else went as far to capture their footage than Buzz Aldrin and Michael Collins (pictured above, right and center), who are nominated for Best Cinematography for a Nonfiction Program for lensing the CNN documentary “Apollo 11.” They literally went to the moon and back. Can the legendary astronauts, who are 90-years-old and 89-years-old, respectively, be rewarded in 2020 for their historic footage?

“Apollo 11” revisited the events surrounding the title mission on the 50th anniversary of the human race’s first ever moon landing. The film is composed entirely of archival footage, some of which had never been released to the public, that was edited together by Todd Douglas Miller, who also directed the film. It was also a contender for film awards earlier this year, earning BAFTA, Independent Spirit and Gotham Award nominations in addition to its victories at the Critics’ Choice Documentary Awards, the Los Angeles Film Critics Association Awards, and our very own Gold Derby Awards, among other plaudits. But it wasn’t nominated for an Oscar, perhaps due to a bias against archival films.

But now it’s nominated for five Emmys. In addition to Aldrin and Collins’s bid for their cinematography, Miller is nominated for directing and picture editing, and Eric Milano contends for both his sound mixing and sound editing. In the cinematography race, the film faces Oscar-winner “American Factory” about a US automotive manufacturer bought by a Chinese company, “Becoming” about former First Lady Michelle Obama, “The Cave” which recounts the 2018 rescue of a junior football team trapped in a cave in Thailand, “Sea of Shadows” about the fight to save the critically endangered vaquita, and the African wildlife documentary “Serengeti.”