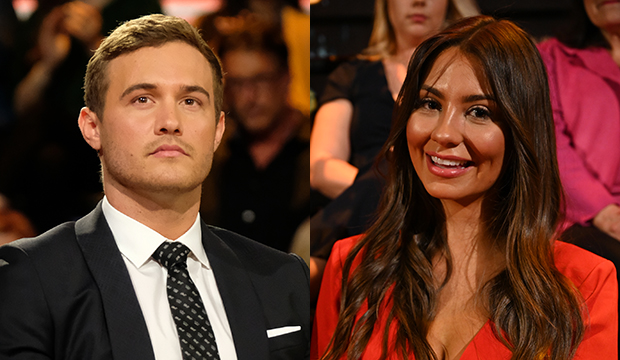 Hey, remember how bad Peter Weber was at making decisions on “The Bachelor”? That’s not exclusive to the ~pressures~ of reality TV. Because the Season 24 star has been out and about with his fifth-place finisher Kelley Flanagan — you know, in the middle of a global pandemic and against stay-at-home orders and social distancing protocols.

TMZ obtained photos of the pair flirting it up on the Riverwalk in Kelley’s hometown of Chicago on Wednesday. How flirty? Well, he was carrying her over his shoulder in one shot. “Folks who saw them tell us Pete was super-flirty and very handsy with Kelley,” the site reported. The pair was accompanied by Dustin Kendrick, Peter’s co-suitor from Hannah Brown‘s season of “The Bachelorette,” who looked very much like a third wheel.

Peter, Kelley, and Dustin currently hanging at the Riverwalk in Chicago. Pics and videos are making the rounds so I’m sure you’ll be seeing these pop up on sites soon… pic.twitter.com/ltD2qMixdm

An early fan favorite on “The Bachelor,” Kelley had denied dating Peter as recently as March 12 — hours before Peter and Madison Prewett announced their split. If you recall, Peter and Kelley had a bit of history pre-“Bachelor” as they had randomly met at a hotel before production commenced. That chance meeting gave Kelley a bit of an edge (or some would say, an unfair advantage) all the way until the final five, when the pilot eliminated her because he felt their connection was more of a friendship, prompting Kelley to drop some choice words for him (in hindsight, the theme of the season).

SEE Ready for your mind to be blown? ‘The Bachelor’s’ Peter and Madison were ‘never really back together’ (Shocking, we know)

“I question his intentions because I don’t really know what phase he is in life. The four [contestants] that are left are like little babies,” she said on the show. “I don’t really know who they are. Are you a child or an adult? Clearly he doesn’t agree. If he’s not able to sit there and make decisive decisions and stuff like that, that’s on him. I don’t want him to waste my time either. Thank you for not coming and meeting my family.”

Kelley was conspicuously absent on the “Women Tell All,” but she did attend the tense live “After the Final Rose,” during which Peter’s mother Barbara excoriated her son for dumping Hannah Ann Sluss to get back with Madison because “everyone” knows they wouldn’t last (true).

Speaking of Barb, she absolutely adores Kelley, calling her her “fave” (sorry, Hannah Ann). “Barb loves me, I guess I’m her favorite. I learned that last night at the finale,” Kelley told E! “She came up to me and … gave me the biggest hug and she was so sweet to me.” Plus, Kelley is the only woman from Peter’s season that his family follows on Instagram. That’s basically being Instagram official.

Something is going on here, however serious (or not) it might be between them. You know what’s serious though? Coronavirus. Why are you guys outside? We know you were quarantining at your parents’ place in Los Angeles, Peter. You wanted to see Kelley so badly that you don’t care about being a germ vector in the Windy City? Are they the new spring breakers? Everyone go back inside!