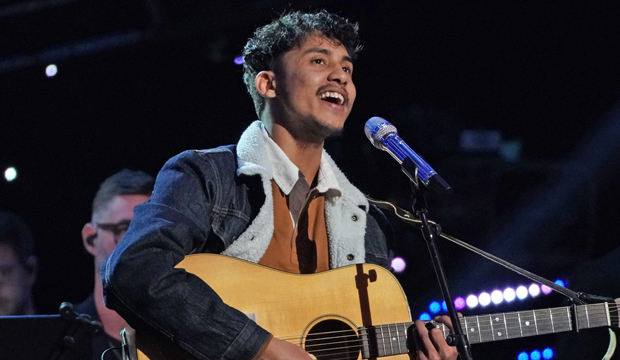 “I really didn’t expect that I’d be this far,” declared “American Idol” fan-favorite Arthur Gunn during his Hawaii showcase on Sunday night. “I’m still trying to grasp it all. ‘American Idol’ has been a long journey and a very exciting journey.” The humble 21-year-old singer from Wichita, KS burst onto the scene weeks ago with his audition of “Have You Ever Seen the Rain,” and earned major props when he returned in Hollywood Week and put his own unique spin on the Creedence Clearwater Revival classic.

Have the “American Idol” judges uncovered the next Alejandro Aranda, aka last year’s runner-up who stayed true to his original roots throughout the competition? “You are probably one of our most unique contestants,” Lionel Richie told a smiling Arthur before giving him the good news — he’d made it into the Top 20 for Season 18. “When you walked in [at your audition] we didn’t quite know what to expect … and then you opened your mouth and you had instant identity,” Lionel recalled.

Arthur decided to stay clear of CCR for his Hawaii performance, instead taking on Bob Marley & The Wailers‘ “Is This Love.” It was a strategic choice since Lionel had previously compared him to Marley. There were no signs of nerves as Arthur stepped out onto the stage, despite him confessing to mentor Bobby Bones, “I have a hard time in front of a lot of people. It’s kind of a new thing for me.”

SEE‘American Idol’: Here’s how coronavirus is altering the 2020 schedule

The judges couldn’t take their eyes off of Arthur as he gave a reggae twist to “Is This Love.” “He’s so pure,” noted Katy Perry. Lionel added, “Oh, I just love him.” Luke Bryan chimed in, “Look at that crowd!” in reference to the hundreds of people who were cast under Arthur’s musical spell.

As it turned out, letting Arthur into the Top 20 was the “easiest decision” the judges ever made. Katy did have one piece of constructive criticism for Arthur, however, reminding him to keep his eyes open every time he performs. “The moments that you did open your eyes are the moments that we just went on a journey with you,” she stated. “So keep connecting, keep your eyes open … let us in.”