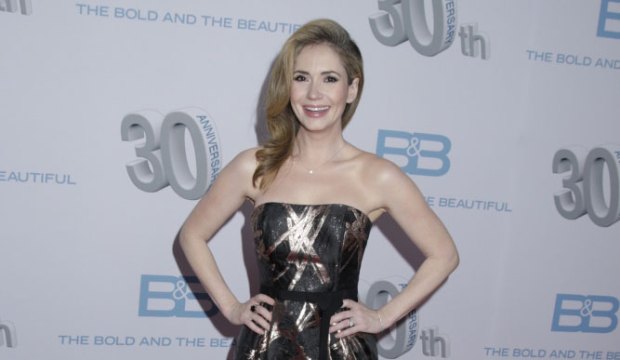 Actress Ashley Jones announced that she will be returning to “The Bold and the Beautiful” in her longtime role as Bridget Forrester. She posted the news on Instagram indicating that she’ll be back on November 2 for a “very quick visit.” Scroll down to see her Instagram post below.

SEEWill Kristian Alfonso (‘Days of Our Lives’) finally win her overdue Emmy for her tragic final scenes as Hope?

Bridget has been an important figure on “B&B” for almost as long as the show has been on the air. She was born in 1992 to Brooke Logan (Katherine Kelly Lang) and Eric Forrester (John McCook), though at the time of her conception Brooke wasn’t sure who her father was. Several actresses played the role before she was aged into a young woman and portrayed by Jennifer Finnigan from 2000 to 2004. She won Best Younger Actress at the Daytime Emmys for three years in a row (2002-2004), which made her the first in history to win the award so many times consecutively.

Jones took over as Bridget in 2004, and she has been by far the longest-running actress in the role. She played the role continuously until 2012, but she has made periodic guest appearances ever since. Perhaps surprisingly, Jones has never been nominated for an Emmy for this performance, though she did receive two Younger Actress noms for her previous role on “The Young and the Restless” in 1999 and 2000. Are you excited to have her back on the canvas, even if only for a brief while?

Nov. 2nd… @boldandbeautifulcbs Do you think it’s to let you know Bridget’s alive and well or a preview for more to come? 💙 #boldandbeautiful #cbsdaytime #veryquickvisit next week #bridgetforrester #amourgloireetbeauté #ashleyjones