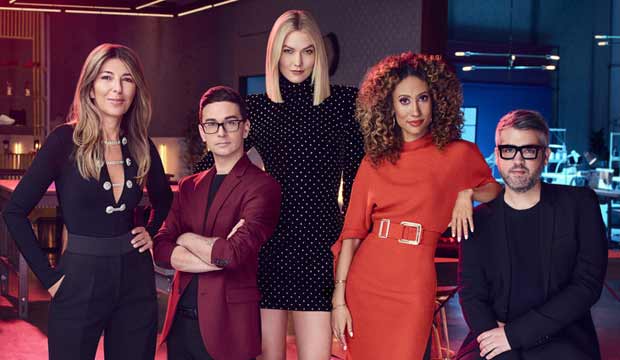 Louisiana-based  painter, gallery owner and entrepreneur Ashley Longshore, who has been dubbed an “avatar of pop feminism to thousands of followers” by the The New York Times as well as a “modern Andrea Warhol” by the New York Post, will be the inspiration behind a challenge that combines art and fashion on “Project Runway” this week.

In the video clip below, Ashley bellows “What’s up!” while standing alongside mentor Christian Siriano. She invites the remaining nine designers to “step into my brain.” Austin, Texas resident Brittany Allen for one, says she has been a fan of Ashley Longshore forever. “She is a pop artist from the South. I love her color palette, I love her sayings on canvas. And she is so unapolegetic about who she is.”

After Christian officially introduces his friend and sometime collaborator to the contestants, Ashley says, “I’m so happy to meet all of you.”  Christian shares the news that Ashley was New York Fashion Week’s latest artist in residence and she has been lauded as the modern-day Andy Warhol. The first solo female artist to ever exhibit at Bergdorf’s.” Joining them is the iconic fashion director of the high-end New York department store is Linda Fargo.

Chicago designer Chelsey Carter is psyched. “Linda Fargo could change my career. I could be sold at Bergdorf’s, which is one of the goals. I just cannot believe this woman is right in front of me. Like losing it!”

The grand lady herself then speaks: “The Palette Cafe at Bergdorf’s is a collaboration between Ashley Longshore and Bergdorf’s. And it’s really the perfect example of how art and fashion and food come together. Really,this is eye candy. These paintings are almost edible.” The camera focuses on a painting of a bunch of bananas with the words “Self Portrait” spelled out in shiny beads.

SEE ‘Project Runway’ recap: The designers got personal and political in ‘There is Only One You,’ but one wasn’t up to snuff

Ashley then says, “It’s very exciting to collaborate and have someone push you. But, for me, this is about being authentic. This is about being yourself. This is about giving them every f***ing thing you’ve got. OK!” The designers do some happy clapping  as Ashley apologizes for her language to Linda. Christian then jokes, “This is Ashley at a 4.”

Alas, those who saw the previews on last week’s episde know that designer Dayoung Kim will once again fall ill and the workroom will not be all fun and games.