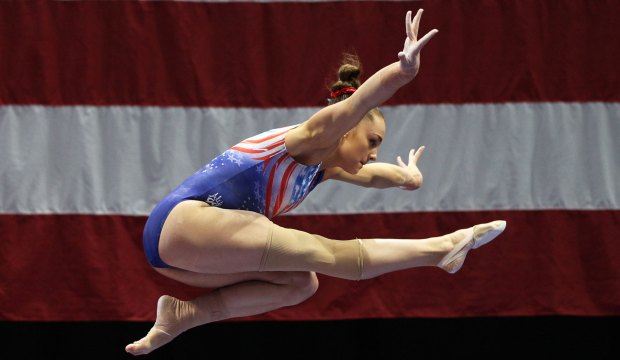 “Athlete A” was set to premiere at the Tribeca Film Festival in April 2020, but after the event was cancelled due to COVID-19 the gut-wrenching documentary, which spotlights an ongoing sexual assault scandal within the USA women’s gymnastics program, premiered on Netflix on June 24. Directors Bonni Cohen and Jon Shenk, the BAFTA-nominated duo behind 2017’s  “An Inconvenient Sequel: Truth to Power,” follow a team of investigative journalists from the Indianapolis Star as they broke the story of Dr. Larry Nassar abusing young female gymnasts for decades. The shocking film details how the powerful #MeToo movement helped bring decades of corruption within USA Gymnastics to light, and it could be a top contender for the Oscar for Best Documentary Feature.

The documentary begins with the story of Maggie Nichols, a top American gymnast who was battling through injuries while competing for a spot on the 2016 Rio Olympics team. Nichols confided in her parents that she felt uncomfortable with some of Nassar’s treatments, and as they began sounding alarms about the team doctor, a coverup by USA gymnastics ensued, which ultimately led to Nichols being left off the Olympic team.

From there we learn of hundreds more accusations, including those from Rachel Denhollander, who tipped off the Indianapolis Star about the sexual abuse she experienced as a 15-year old. Their investigation exposed the biggest sexual abuse scandal in sports history, bringing forward more than 250 allegations which led to 13 convictions for Nassar, who was sentenced to 175 years in prison.

“Athlete A” has been called “equal parts devastating and inspiring” and as of this writing holds a MetaCritic score of 85 from 12 reviews, all positive. Over on Rotten Tomatoes, it currently has a 100% freshness rating, which makes it one of the most critically acclaimed documentaries of the year. Kristen Yoonsoo Kim of the New York Times said, “Cohen and Shenk amplify the voices of the survivors while recognizing that Nassar’s arrest doesn’t dissipate the pain or deep-rooted exploitation.” G. Allen Johnson of the San Francisco Chronicle calls it “a terrific journalism movie.” And Leslie Felperin of the Hollywood Reporter says it’s “fascinating and sensitively handled.”

Now “Athlete A” could be a top contender for the 2021 Oscars. In recent years the academy has given their top prize to multiple documentaries that focused on or incorporated sports into a deeper story, including “Undefeated” (2011), “O.J.: Made in America” (2016), “Icarus” (2017) and “Free Solo” (2018). Cohen and Shenk’s documentary from Actual Films Production Studio not only tells the story of the perseverance and grueling dedication it takes to be a top athlete, but also how speaking out about sexual assault has revolutionized our culture. That could resonate with the motion picture academy, whose industry has seen its own #MeToo reckonings, making the film a strong candidate to win.