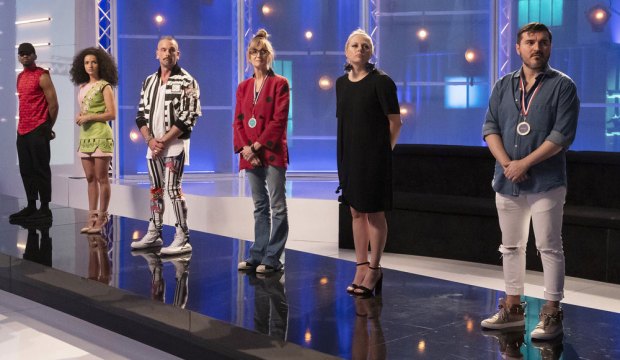 Ah, just as the two-part finale of the 18th season of Bravo’s “Project Runway” is right around the corner, it is time for the avant-garde challenge. It will decide which two designers will not be making a collection for New York Fashion Week since everyone was declared safe on the previous episode. The only show staple that strikes greater fear in the designers is when the unconventional materials start flying about the workroom.

The inspiration for the challenge is a newish New York City landmark known as the Vessel, or as my fellow editor Daniel Montgomery calls it, the Glorious Space Pine Cone. In a preview, we first see mentor Christian Siriano asking Nancy Volpe-Beringer what she is up to. She is making some kind of fabric for her piece, but she doesn’t seem to have a concrete idea yet.

SEE ‘Project Runway’ Saves: Who did Tim Gunn and Christian Siriano save from elimination?

As fellow designer Geoffrey Mac rightly notes, Nancy “likes to do things on the fly, and I think it’s not always the right way considering that a third of the people are about to get eliminated. It’s a little bit risky.” Christian then chimes in, telling Nancy, “I know you love to play with your silhouette, but I think you should really work out what is this going to be. Is this a skirt, is this a dress, you’re always down to the end.” Good advice, indeed.

SEE Designers who quit ‘Project Runway’: Who left the show and why?

He then walks over to Victoria Cociercu, who offers Christian something that sounds sort of like “cucumber,” and he says, “I’m fine with cucumber.” She starts by showing him a gold sunburst-like earring and some sort of scarf. But he doesn’t get her sketch. “It looks like ‘Lord of the Rings’ up in here,” he says, before adding,”I don’t know what’s in your head.”

Hmm? Do you think the “Project Runway” who is going home this week by focusing on these two designers? Watch the clip below and tune into Bravo at 9 p.m. ET/PT on Thursday to see whether Victoria and Nancy are closing in on Mordor’s Mount Doom.