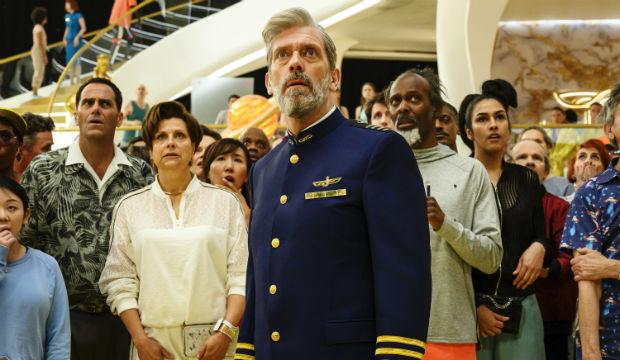 Armando Iannucci’s HBO series “Avenue 5” feels like the catastrophe comedy perfectly suited for our unprecedented times. The freshman series chronicles a futuristic, luxurious journey around Saturn that goes horrendously off course thanks in part to the horribly inept leadership of its actor-turned-captain Ryan Clark (Hugh Laurie) and a revolution amongst its privileged passengers.

The show spotlights and satirizes the failures of leadership during a major crisis and the follies of those who disbelieve scientific truths, but despite this unintentional timeliness in the age of a global pandemic “Avenue 5” lags significantly in the Comedy races in our combined Emmy odds.

Yet the freshman series also boasts similarities to Iannucci’s preceding HBO comedy series “Veep” that could foreshadow some Emmy success come nominations morning. Not only did Iannucci reassemble much of his creative team from “Veep” to work on “Avenue 5,” including Simon Blackwell and Tony Roche, but both shows feature similar themes of ineptitude starring ensemble casts of veteran and new faces surrounding a beloved television star.

In fact, “Veep” looked much like “Avenue 5” in its first outing, both experiencing a bumpy start with critics. The first season of the three-time Comedy Series champ, for example, is the lowest scoring of its entire run by far on Metacritic and Rotten Tomatoes. Accordingly, our savvy users predicted “Veep” to just narrowly miss out on a Comedy Series nomination, though we knew its incomparable lead Julia Louis-Dreyfus would nab a bid. Nevertheless, the show went on to over-perform our expectations, landing not only in Lead Actress, but also Comedy Series and Casting.

It’s not outside the realm of possibility, then, that “Avenue 5” could repeat the first-year success of its creator’s predecessor with unexpected bids in Comedy Series, Lead Acting, and Casting.

“Avenue 5” currently sits far outside of the Comedy Series race in 33rd place in our combined odds, trailing fellow HBO series “Curb Your Enthusiasm” (4th), “Run” (6th), “Silicon Valley” (11th), and “Insecure” (28th), but leading “The Righteous Gemstones” (36th). Though its extremely low position seems disqualifying, there are two slots in the race ostensibly up for grabs. Most experts and editors look committed to “The Marvelous Mrs. Maisel,” “Schitt’s Creek,” “Curb Your Enthusiasm,” “The Good Place,” and “Dead to Me,” but lack a real consensus on the next most-likely contenders. With such uncertainty in the race, an extremely left-field pick from the mind of two-time Emmy winner and Oscar-nominee Iannucci might not be entirely implausible.

And though it lacks a groundswell of buzz, other series performed well with less. “Veep” was in much stronger position in our combined odds back in 2012 in 7th place even though its viewership numbers were measly. “Avenue 5,” on the other hand, quadrupled the ratings of the first run of “Veep” and, in comparison to this year, nabbed almost double the eyeballs of “Run.” The latter has better critical notices, but “Avenue 5” has been more widely seen.

Hugh Laurie looks more competitive for a nomination than the show itself, sitting in 11th place in our combined odds with the current support of two of our editors. While Laurie doesn’t have the Emmy-minted success of 2012 Julia Louis-Dreyfus––who had already won two Emmys (“Seinfeld,” “The New Adventures of Old Christine”) with 10 additional nominations under her belt––he’s no slouch in the eyes of the television Academy either. Laurie has earned 10 Emmy nominations over the span of his career, eight for acting with one of those as a guest actor for his recurring role on “Veep.” While he’s never taken home a prize, the academy almost always seems keen to invite him into the nomination circle.

Comedy Casting could be a tougher line-up to crack because its limited number of five bids usually go to the top Series contenders, but “Avenue 5” might have an ace up its sleeve. Though the series casting director Sarah Crowe doesn’t yet have a track record with the Emmys, voters will also be considering the contributions of veteran casting director Allison Jones, who shares the casting credit on the pilot episode “I Was Flying.” Jones has an impressive 12 Emmy nominations, including three wins. Five of those nominations and the majority of her wins are for “Veep.” In addition to Laurie, Crowe and Jones assembled a robust ensemble filled with recognizable industry stalwarts including Suzy Nakamura, Josh Gad, Nikki Amuka-Bird, Ethan Phillips, Lenora Crichlow, Zach Woods, and Rebecca Front.