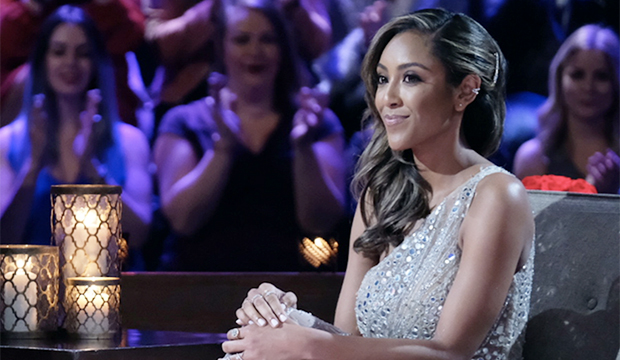 And here we thought “expect the unexpected” was “Big Brother’s” motto. Tayshia Adams has replaced Clare Crawley as the lead of Season 16 of “The Bachelorette,” but the twists and alum arrivals to set haven’t stopped. In the past few days, a handful of Bachelor Nation stars have been spotted or are believed to have arrived at the La Quinta Resort & Club in La Quinta, California, where the season is filming.

On Tuesday — a day after Adams was reported to take over for Crawley, who fell for one of her suitors already — Hannah Ann Sluss, the winner of “The Bachelor” Season 24, was photographed on location with a suitcase and talking to producer Julie LaPlaca. The Instagram account @bachdetective has compiled evidence that indicates that former Bachelorette Becca Kufrin and “Bachelor” alum Ashley Iaconetti are also on set. Meanwhile, @newsnextdoor noted that Sydney Lotuaco, who was on Season 23 of “The Bachelor” with Adams, appears to be there as well.

If you look at Ashley I’s sunglasses reflection, you’ll see similar blue doors, bushes, and flooring that are similar to the ones at the resort. Wonder if she’s there?

On Thursday, “Us Weekly” obtained photos of “Bachelorette” alum and “Bachelor in Paradise” bartender Wells Adams behind a bar on set and chatting with Chris Harrison.

So what is going on here? Are TPTB trying to salvage “Bachelor in Paradise” and shoot two shows at once? Well, that would require flying out a lot more women, like Reality Steve pointed out.

According to E! News, Sluss and Kufrin are there as friends and likely won’t appear in more than one episode. “It’s now transitioning into a regular ‘Bachelorette’ season and they are there to lend support,” the source said, adding that producers are mimicking recent seasons and recruiting past contestants to come and offer the lead advice.

Reality Steve highlighted one of the things Sluss and Kufrin have in common: They were initially chosen as the winner of their respective “Bachelor” seasons and then dumped. “What if their presence is nothing more than them talking to the guys still there about being ‘second choice?'” he tweeted.

Thinking out loud: We know Becca and Hannah Ann are at filming. Those two have something in common: they were initially chosen, then not. What if their presence is nothing more than them talking to the guys still there about being “second choice?”

As for Adams, well, he’s probably there to do exactly what he’s been photographed doing: bartending. Because what is a “Bachelor/ette” season without booze?