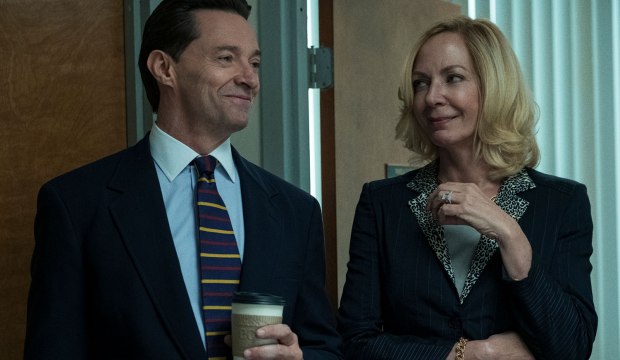 Two much-admired funny ladies, Cloris Leachman and Julia Louis-Dreyfus, share the record for the most Primetime Emmy wins for acting with eight each. But both trophy-magnets might want to be prepared to welcome a new member to their elite club. Namely, Allison Janney, whose role in HBO’s darkly comic truth-based movie “Bad Education” pairs her with Hugh Jackman as an assistant to his much-worshipped superintendent of an elite Long Island high school. Students are being recruited by Ivy League colleges while the district’s rep also boosts the economy of the area when it comes to real estate prices. It’s a win-win for everyone.

But what his many admirers don’t know is that Jackman and Janney’s characters are partners in crime who have been embezzling millions of dollars from the district to provide them both with a lavish lifestyle.

In front of people, they act as if they are devoted cheerleaders for their schools and community. But while taking an outdoor lunch break on the high-school’s bleechers, there is a different vibe between Frank and Pam. He sips a diet smoothie that isn’t his usual flax seed version and opines, “I would kill someone for a carb right now,” he says. Guess who has some? Janney tempts him with a decadent pastrami on rye that she devilishly places in his mouth as he bites with gusto. Her enablement of his food indulgence is a microcosm of their mutually beneficial criminality.

That moment foreshadows both their deceptive natures and their bond based on lies as Janney nails her Long Island accent. We next see her at her water-side McMansion home hosting a party during a holiday weekend, complete with pool and huge deck. She tells her guests that she and her family are planning a big remodel in the future. Her not-so-bright son will act as her contractor, a choice that will lead to Pam’s downfall that will eventually undermine Frank’s own pristine reputation.  Janney’s explosive scene when she reveals to her family that they have been living on ill-gotten gains and blames them for her dirty deeds and loss of her career is a Emmy-worthy meltdown if there ever was one.

As for her past Emmy record, Janney — who won a supporting Oscar as another fatally flawed mother, LaVona Golden, the abusive mother of Olympic skater Tonya Harding in 2017’s “I, Tonya” — she has amassed seven so far. Janney was rewarded with four Emmys for her role as C. J. Cregg opposite Martin Sheen as President Jed Bartlet’s press secretary before she was promoted to Chief of Staff. She was nominated for her six of her seven seasons on the show, winning a supporting trophies in 2000 and 2001 while claiming lead actress prizes in 2002 and 2004. She won two more supporting Emmys for her work on her current CBS sitcom, “Mom,” in which she co-stars with Anna Faris as her daughter, who shares her mom’s struggles with drug addiction. Janney’s seventh Emmy came courtesy of her dramatic Guest Actress role as as the wife of a medical school provost played Beau Bridges on the Showtime series “Masters of Sex.”

Right now, Janney sits at No. 5 among the Emmy Experts on the list of movie and limited series supporting actresses with 17/2 odds, with 15 out of 21 picking her to be nominated and only one — Debbie Day of Rotten Tomatoes — picking her to win.