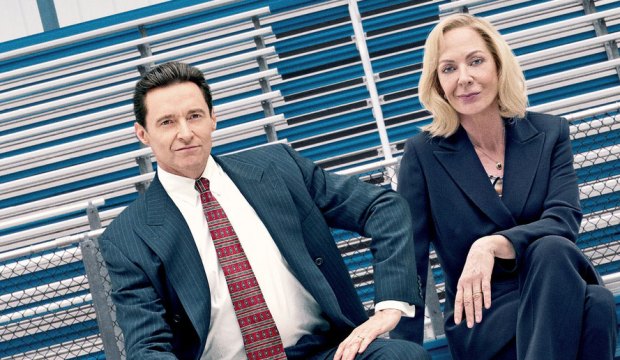 “Bad Education” premiered last fall at the Toronto Film Festival, but it makes its debut on HBO on Saturday, April 25. So what do critics think of this fact-based film about an embezzlement scandal at a Long Island public school?

As of this writing the film has a MetaCritic score of 79 based on 16 reviews counted thus far: 14 positive and 2 mixed, but none outright negative. Meanwhile, Rotten Tomatoes classifies reviews simply as positive or negative and not on the sliding scale from 0 to 100 like MetaCritic, and they rate the film as 90% fresh based on 52 reviews, only 5 of which are categorized as negative. The RT critics’ consensus says, “Anchored by an outstanding Hugh Jackman, ‘Bad Education’ finds absurd laughs — and a worthy message — in the aftermath of a real-life scandal.”

Indeed, Jackman’s performance has been singled out for praise by many reviews. He plays school superintendent Frank Tassone and “delivers an acting master class.”  It’s an “unflattering” role for the movie star, which makes it “courageous” and “the best work he’s ever done.” He and his “wonderfully restrained” co-star Allison Janney use their “inherent likability” to “lead us down a thorny, jagged path.”

The film is directed by Cory Finley, who earned Independent Spirit Award and Gotham Award nominations for his feature film debut, the black comedy “Thoroughbreds” (2018). This followup film “digs deeper into the souls of its characters,” and while others say the film is “slight” and “unfocused” at times, it still leaves you feeling “confident” in the filmmaker’s promise, as well as in the “prowess” of its leading man.

SEEEGOT watch: Hugh Jackman wins Grammy for ‘The Greatest Showman,’ is just an Oscar away from grand slam

The film is a major Emmy contender in the race for Best TV Movie, though it faces a tough challenge from, among others, Netflix’s “El Camino” and “Black Mirror” — the first of those is a followup to the Emmy-darling series “Breaking Bad,” while the latter is the three-time defending champ in the category.

Jackman and Janney are also strong contenders in acting races. Janney has already won seven Emmys for acting; Jackman is an Emmy winner too for hosting the 2004 Tonys, but he has yet to be nominated for acting. Could they both win this year? Check out some of the reviews below, and join the discussion on this and more here with your fellow TV fans.

Peter Debruge (Variety): “Hugh Jackman delivers an acting master class, trading on his charismatic star persona to reveal the rotten core of bad-apple superintendent Frank Tassone … This role presents him in such an unflattering light … that you’d think his agent would have advised him against it. (George Clooney’s probably did.) That’s what’s so courageous about Jackman’s decision, and one of several reasons that ‘Bad Education’ is the best work he’s ever done.”

Stephanie Zacharek (Time): “Hugh Jackman and Allison Janney use their chief currency — their inherent likability — to lead us down a thorny, jagged path … ‘Bad Education’ is a story of small-town villains who just can’t help themselves, and it’s fun to see how their own carelessness trips them up. These are people we can’t trust, played by actors we trust implicitly. Why not be flimflammed by the best?”

Jordan Mintzer (Hollywood Reporter): “The satire is softened to let reality sink in, with characters and plot points drawn from actual sources, resulting in a movie that plays like a slow-burn investigative thriller with comic touches and a major comeuppance in the last act. It’s perhaps less flamboyantly enjoyable than Finley’s first feature, but it also digs deeper into the souls of its characters.”

Benjamin Lee (Guardian): “It’s a relief to see [Janney] dialed down here. She’s wonderfully restrained and utterly credible … The film’s real ace is a never-better Jackman … It’s a slight movie at times, unfocused at others, even plodding in parts, and I didn’t leave the cinema entirely convinced that it was the most satisfying way to tell this particular story but I did leave feeling confident in both Jackman’s prowess and Finley’s promise, yet to be fully realised.”