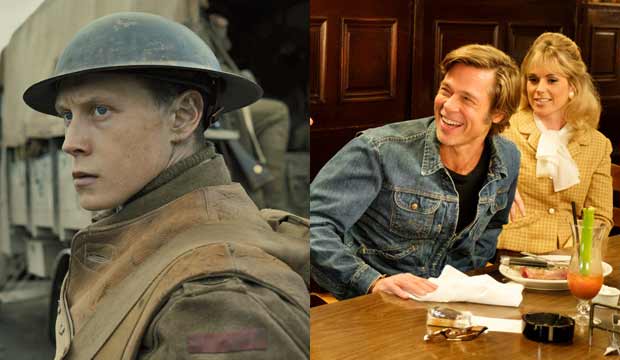 “1917” is predicted to be the big winner at the BAFTA Awards on Sunday February 2 going five for nine and claiming both Best Picture and Best British Film. Do you agree? Scroll down to see our complete BAFTA predictions by film. These predictions are based on the combined forecasts of industry experts, our in-house team of editors, the top 24 (those who did the best predicting last year’s BAFTAs), the all-stars (the most consistent scorers among our readers) and thousands of people just like you.

“Once Upon a Time in Hollywood” will win four of its 10 bids: Best Supporting Actor (Brad Pitt), Original Screenplay, Production Design and Casting.

While “Joker” leads with 11 nominations, it is expected to bag just two BAFTAs for leading man Joaquin Phoenix and score.

“The Irishman” is slated to go home empty-handed, despite 10 nominations. Other films all but certain to be shut out are five-time nominee “The Two Popes,” four-time contender “Rocketman” and three-timer “Star Wars: The Rise of Skywalker.”

Do you agree with our picks? Check out our complete predictions by film below. And there’s still time to make or update your own predictions right here before prizes are handed out on February 2.