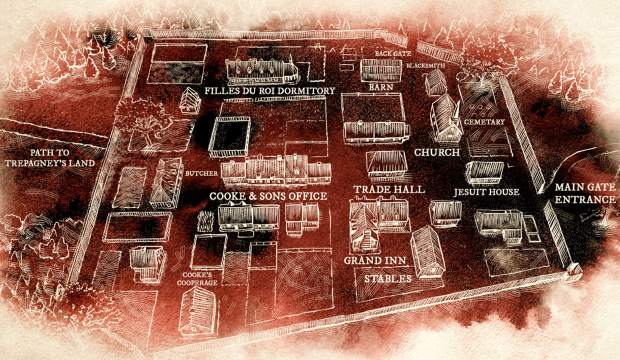 “Barkskins” is the first novel by Pulitzer Prize winner Annie Proulx since the Oscar-winning adaptation of her source material for “Brokeback Mountain.” National Geographic actually optioned the rights to the epic in 2016, months before its publication and it is arriving on our screens four years later, just in time to qualify for the 2020 Emmys. Set in New France toward the end of the 17th century, Nat Geo has invested in the craft of this period drama as it eyes nominations below the line in Creative Arts categories. The network hosted the press privately at a virtual premiere event this past Sunday, featuring webcam panels that included not only the cast, but also costume designer Anna Terrazas and production designer Isabelle Guay, affirming a comprehensive push for the show as Emmy voting approaches.

Terrazas contends in the Best Period Costumes category, in which Nat Geo has been nominated twice in recent years, for both seasons of “Genius” thus far. That anthology was supposed to contend again this year, but it did not complete production before the industry locked down in March. “Barkskins” was set for a fall run, but is now taking the “Genius” spot in the spring, since it had committed previously to an accelerated post-production schedule anyway. Nominating ballots in the costume categories are tabulated such that limited series contend for separate slots as comedy and drama series, so “Barkskins” does not need to match up to category mainstays like “The Crown” and “The Marvelous Mrs. Maisel” to score a nomination; it instead contends to fill one of the two slots that have been allocated for limited series, because Nat Geo is entering the season overall for Best Limited Series. Only two of the top seven contenders in Gold Derby’s odds for that race are period pieces, so the depth of competition for “Barkskins” is surmountable.

“Barkskins” marks only the second series credit (after “Jack Ryan”) for production designer Isabelle Guay, whose film career has yielded five nominations from the Art Directors Guild, including two wins, the more recent being a Best Period Production Design award for “The Revenant.” Nat Geo is actually using a broadcast of that 2015 Oscar-winning film to lead into the “Barkskins” double-premiere on Monday, making for a five-hour programming block that showcases Guay’s work. She returned to the Canadian frontier for “Barkskins,” building its village community from the ground up in the forests of Quebec, without ever shooting on studio sets. Nat Geo has distributed the map above to spotlight the scale. Guay contends in Best Period/Fantasy Production Design, which does not tabulate limited series separately — perhaps because it would be redundant; two of the nominees last year were miniseries, including eventual winner “Chernobyl.”

“Genius” won two Emmys for its last season two years ago: Best Movie/Limited Cinematography and Best Movie/Limited Sound Mixing. Those categories might represent the best bets for “Barkskins” too. It is formidable for the latter because gunfire and the outdoors are hallmarks of sound nominees. The Emmys have nominated the likes of “Texas Rising” and “Waco” for their sound mixing without those miniseries registering above the line; “The Revenant” won the equivalent awards from BAFTA and the Cinema Audio Society.

SEENat Geo’s Emmy submissions this year by program and category.

James Hawkinson shot the “Barkskins” pilot; “The Man in the High Castle” was the last pilot that he shot in Canada and it resulted in an overdue first Emmy nomination after being overlooked for his standout visuals on “Hannibal” under “Barkskins” producing director David Slade. “Barkskins” faces an uphill battle because Best Movie/Limited Cinematography tends to have only four nomination slot instead of seven like in Best One-Hour Cinematography, but Hawkinson can overcome the odds if anyone can. He went on to win that 2016 award and “The Man in the High Castle” finished the decade as the only drama to win for its cinematography without ever being nominated for Best Drama Series (or anywhere above the line).

Will nominations do you think “Barkskins” will get? Make your Emmy predictions so that Hollywood insiders can see how their shows and performers are faring in our odds. You can keep changing your predictions as often as you like until the nominations announcement on July 28. And join in the fun debate over the 72nd Primetime Emmy Awards taking place right now with Hollywood insiders in our television forums.