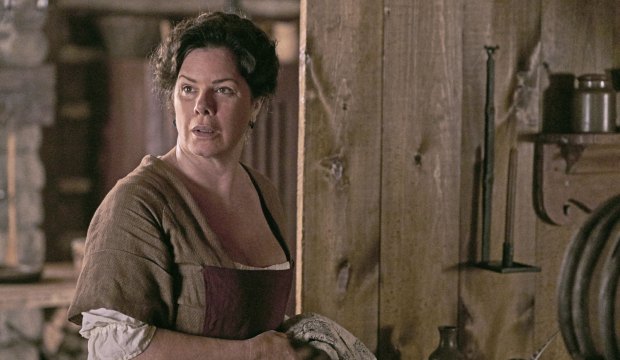 With “Genius: Aretha” (and everything else) forced to halt production in March, National Geographic moved the premiere of “Barkskins” up six months in their schedule to take its place as their big scripted push for the 2020 Emmys. The historical fiction drama series adapts the first 100 pages of the 2016 Annie Proulx novel of the same name across its eight-episode first season that will now air with back-to-back hour-long episodes over four Mondays in May and June, starting with Memorial Day. Nat Geo is shrewdly entering the show in the Best Limited Series race to capitalize on their momentum from “Genius” in the race.

“Genius” missed 2019 as it retooled the third season to focus on Cynthia Erivo as Aretha Franklin instead of Mary Shelley, but Nat Geo ran “The Hot Zone” starring Julianna Margulies instead in its plum spring time slot. “The Hot Zone” got unlucky, as it was overshadowed at the Emmys by “Chernobyl,” the decade’s most awarded miniseries, which also dramatized crucial containment efforts in the late 1980s over five hours. “The Hot Zone” nonetheless drew generally favorable reviews from critics and record viewership ratings for Nat Geo.

“Barkskins” is positioned to best even those numbers, thanks to Disney’s acquisition of Fox that moved jointly-owned outlets like Hulu and Nat Geo under the same umbrella. It is now commonplace for programs produced for the likes of ABC and FXX to be available for streaming on Hulu in the day after their initial broadcasts. This cross-platform release structure resulted in “Dave” recently breaking cumulative audience records to become FX’s most watched comedy ever. “Barkskins” will be the first Nat Geo show to get a next-day release on Hulu. Becoming a mainstream hit would give “Barkskins” an edge that helped “Chernobyl” prevail last year.

As Nat Geo was breaking through at the Emmys, so was “Barkskins” lead actor David Thewlis. He earned his first Emmy nomination for the 2017 season of “Fargo” in Best Movie/Limited Supporting Actor and went on to be cited by the Golden Globe and Critics’ Choice Awards as well. Thewlis now contends for Best Movie/Limited Actor, having returned to desolate Canada for “Barkskins,” which is set in New France during the late 17th century in what is now Quebec.

SEENat Geo’s Emmy submissions this year by program and category.

Oscar winner Marcia Gay Harden gives the only other performance that Nat Geo has submitted for consideration; she contends for Best Movie/Limited Supporting Actress. Like Thewlis was a few years ago, Harden is due for recognition, as her last major nomination was in the same Emmy category for 2009’s “The Courageous Heart of Irena Sendler.” She has since recurred on Emmy-winning shows like “How to Get Away with Murder” and “The Newsroom” and even contends this season in Best Drama Supporting Actress for recurring on “The Morning Show.”

Will “Barkskins” be a quarantine hit? Make your Emmy predictions so that Hollywood insiders can see how their shows and performers are faring in our odds. You can keep changing your predictions as often as you like until the nominations announcement on July 28. And join in the fun debate over the 72nd Primetime Emmy Awards taking place right now with Hollywood insiders in our television forums.

Will 'Curb Your Enthusiasm' return to SAG Awards after last year's snubs?

Drake withdrew his own 2022 Grammy nominations just as voting started

Leslie Odom Jr. ('The Many Saints of Newark'): David Chase's writing 'allows you to express your own…

Anika Noni Rose ('Maid') on the compassionate Netflix series: 'If we do not find a space of empathy, we…

In honor of 'Tick, Tick ... BOOM,' let's revisit these classic movie musicals about…

Justine Bateman's feature directorial debut 'Violet' asks 'what would you do if you weren't afraid?'…