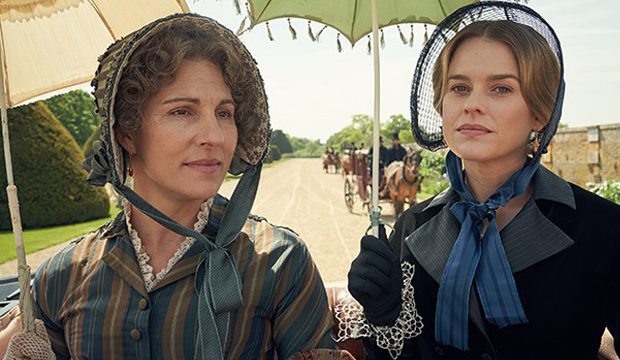 Fresh from the success of the “Downton Abbey” film, Oscar and Emmy winner Julian Fellowes returns with “Belgravia,” a new limited series on EPIX that he’s adapted from his 2016 best-selling novel. Set in the well-heeled London neighborhood in the 1840s, the story chronicles the lives of the aristocratic Bellasise family and the upwardly mobile Trenchards.

EPIX is rolling out this six-parter weekly with a new episode debuting every Sunday night. But Emmy voters don’t have to wait to see how the story unfolds – they can visit the EPIX FYC site to watch all six episodes now. “Belgravia” was directed by two-time BAFTA nominee John Alexander (“Exile,” “Small Island”). With just one helmer for all the episodes, “Belgravia” has the feel of a film. That feeling is underscored by composer John Lunn, who won two Emmys for his work on “Downton Abbey.”

Period pieces like “Belgravia,” with their lavish attention to detail, are catnip to the guilds. As with “Downton,” “Belgravia” mixes location shooting in some of England’s grandest houses with studio sets. The Emmy-winning team from “Downton Abbey” — production designer Donal Wood, art director Mark Ebby and set decorator Linda Wilson — reunited. That contrast between the living quarters for the upstairs and downstairs sets is likewise reflected in the costumes by Emmy nominee James Keast as well as the makeup and hairstyling crafted by BAFTA nominee Pamela Haddock.

Baron Fellowes of West Stafford, to use his full title, first told this story in a serialized form in the Telegraph newspaper, ending each chapter on a cliffhanger just as Charles Dickens did 150 years ago. And like Dickens, Fellowes has packed the plot of “Belgravia” with such staples of Victorian novels as a marriage of convenience, a long-lost heir, a hunt for missing papers and a sly servant.

The plot pivots on one eventful night a quarter-century prior when, on the eve of the Battle of Waterloo, British society gathered in Brussels for the Duchess of Richmond’s ball (Thackeray set the climax of his classic novel “Vanity Fair” there as well.) For Sophia Trenchard (Emily Reid), daughter of the chief supplier to the British Army, this one night changes her destiny. Her fate becomes intertwined with that of the Bellasise brood, much as Matthew’s did with the Crawley clan in “Downton.” This is fallow ground for Fellowes, as he once again deftly explores the tension between old and new money.

Fellowes’ talent for plotting is matched by his ear for dialogue. He won an Oscar in 2001 for scripting “Gosford Park,” which deftly combined a comedy of manners with a murder mystery. And he prevailed on the first of his four Emmy bids for “Downton Abbey.”

Maggie Smith stole scenes, and bagged three Emmys, as the tart-tongued dowager in “Downton.” Expect Harriet Walter to do the same as Caroline, Countess of Brockenhurst, the grande dame forced by circumstances to consort with the Trenchards. The “Belgravia” cast also includes Oscar nominee Tom Wilkinson as her beleaguered hubby Peregrine, Earl of Brockenhurst, and two British TV veterans — Tamsin Greig (“Episodes,” “Green Wing”) and Philip Glenister (“Life on Mars,” “Ashes to Ashes”) as the social climbing Anne and James Trenchard.